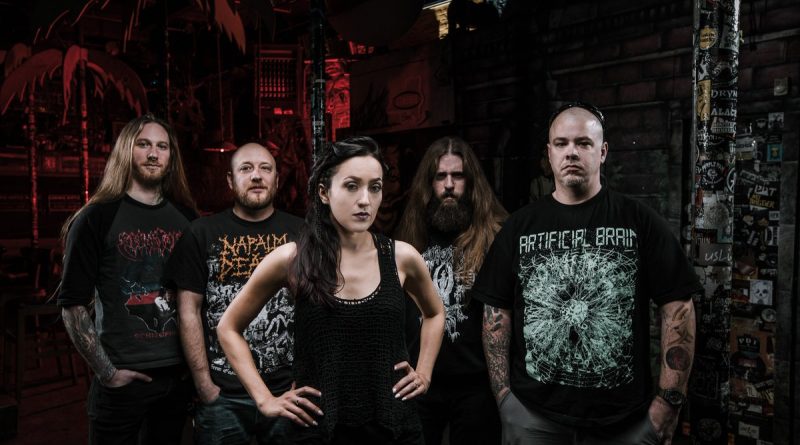 The previous singles – “Curb Stomp” and “A Catastrophic and Catalyzing Event” – can be viewed now at: metalblade.com/abnormality – where the album can also be pre-ordered in the following formats: 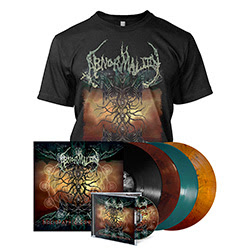 Full Of Hell have shared the official audio for “Army of Obsidian Glass” off their highly anticipated new album Weeping Choir. Listen to the new track, featuring the inimitable Lingua Ignota on guest vocals below:

Guest vocalist Lingua Ignota comments: “‘Armory of Obsidian Glass’ rips, and is probably my favorite FOH track to date, so it was a great pleasure to work on it. I wanted my vocals to provide a counterpoint to all the savagery, to pick up on and accentuate harmonic things happening in the music in an unexpected way. I think the effect overall is chilling, wild, and I’m excited for people to hear it — many thanks to my friends for letting me contribute to this amazing song.”
Full of Hell make their Relapse debut with their most explosive album to date, Weeping Choir. Dynamic, pissed, and wholly urgent, the highly anticipated Weeping Choir is a definitive statement of intent by one of the underground’s most dynamic and virulent entities.  Full of Hell have once again culled the extreme elements from hardcore, metal, and power electronics to redefine darkness and sheer brutality. Distorted guitars, and ominous, disparate electronics grind and gnash against rapid-fire drumming, as Full of Hell take themes of religion, loss, hatred, and set them ablaze. Recorded by the critically acclaimed Kurt Ballou at GodCity Studio, Weeping Choir sees Full of Hell fully unleashed.
Full of Hell will the headline the Weeping Caustic Torment North American tour with labelmates PRIMITIVE MAN & GENOCIDE PACT starting May 24 at Maryland Deathfest. All confirmed tour dates are available below. Following that tour, Full of HellL return to Europe for a co-headlining trek with The Body beginning July 4 at the legendary Roskilde Festival. Full of Hell & The Body will perform a collaborative setlist on various dates throughout the tour. More info about these tour can be found here.

On May 24th, NYC’s Tanith will release their debut full-length, In Another Time, via Metal Blade Records. Taking their name from a character in the classic Hammer Horror The Devil Rides Out,Tanith play vintage hard rock that harks back to the glory days of Blue Oyster Cult, Thin Lizzy andUriah Heep. However, while such influences resonate through their music, they are never derivative, having a strong musical identity and forging their own sound.

For a preview of In Another Time, the new single, “Under the Stars”, can be heard below:

The origin of Tanith lies in Cindy Maynard (Bass, Vocals) and Satan‘s Russ Tippins (Guitars, Vocals) playing covers in clubs and pubs in Tippins’ native UK, but it soon became obvious that they wanted to create content of their own, and form a full band. Deciding to locate the act in New York, they recruited close friend Charles Newton on guitar and drummer Keith Robinson to realize this. “Let me just say upfront that this is no solo project, but a four-piece band where each member has an equal say,” Tippins says. “If I even wanted to call the shots these guys wouldn’t let me! Collectively, we have a dynamic that really works. Not only are we friends who hang out as a matter of course, but musically the pieces all fit to make a picture. It’s a rare thing and I appreciate it more than most, having played in so many bands previously.” The manner in which the four musicians combine is indeed a special thing, and every contribution is essential. “Russ brings most of the substance, spirit and lyrics to the band,” Maynard enthuses. “He’s a visionary, so easy to work with creatively, and just loves getting together and playing with his friends. Charlie is a natural complement to Russ on the guitar, I would say technically and creatively, and he has a way of explaining things with a clarity that makes technically tricky things somehow simpler to execute. Then we have Keith, who is a great, flexible and tasteful drummer, and his grounded nature and playing really anchors everything we do.” Tippins likewise enthuses about Maynard’s contributions, heralding her as “an inspirational person who leads by example in every way. There is no one else I’d rather have beside me on stage, while off stage she is an orchestrator with the vision to keep things on point.”

A home demo of the song “Citadel” – made by just Maynard and Tippins – marked the official birth of the band, and the subsequent 7″ recorded with the whole unit demonstrated what happens when the four of them work together. Selling out of physical copies of the two-track 7″ in ten weeks, the songs continue to sell on Bandcamp and have been purchased by fans in Thailand, Russia, Greece, Japan, Australia and numerous other territories – the band feeding on the enthusiasm garnered from around the world. Now, they’re following it up with their debut full-length, In Another Time, which Maynard aptly describes as, “great riffs, lots of melody, interwoven parts, and twin fucking guitars! I think the record is refreshingly different from so many other records being put out now, and the analog warmth of the recording definitely adds to the feel and experience.” Lyrically, they eschew the angry, cocksure, nihilistic, or occult-based subjects common to a vast amount of contemporary rock and metal bands, and instead come from a more positive place – Tippins asserting, “With Tanith we wanted to offer more of a message of hope, and an escape to the realms of fantasy. Broadly speaking, it’s optimism over pessimism.” All the tracking of the record was handled at Excello Studios in Brooklyn, NY, and owner Hugh Pool engineered and mixed the entire collection. “The analog equipment we tracked with affected not only the mood but also the creative process. Real analog equipment from the 60s and 70s has a distinct sound, feel and even smell,” says Newton – and this only adds to the organic, old school feel of the record.