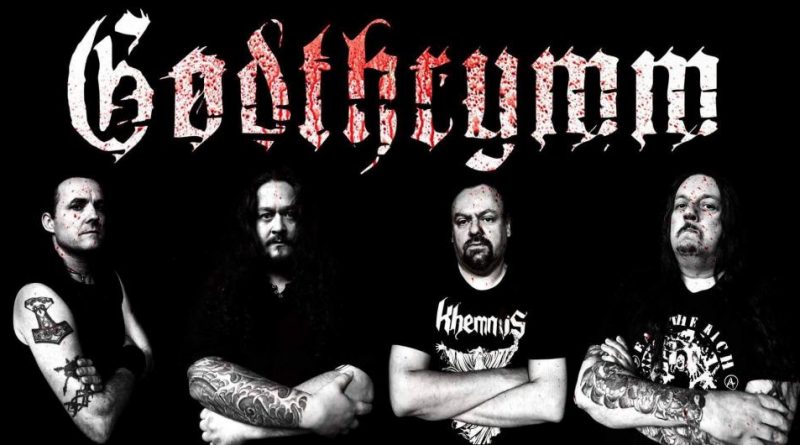 Writing and rehearsing for A Grand Reclamation commenced early 2017, and November 2017 saw the band head into the fabled Academy studio, with fellow MY DYING BRIDE alumni Dan Mullins at the desk. Once completed, the band were very proud to have Decibel Magazine announce their existence to the world, exclusively streaming a preview of the title track from A Grand Reclamation. With the start of 2018 came the announcement that the band are honoured to see their hard work being released on vinyl courtesy of Cosmic Key Creations, and on digipak CD courtesy of Transcending Records. The EP features stunning artwork from Brian D’Agosta, whose credits include Vallenfyre and Implore, amongst many others. We await the physical release of the EP, and expect GODTHRYMMto make their live debut in the coming months…

GODTHRYMM is a reconnection of old brothers with a shared musical past, to create crushing new apocalyptic metal that is a culmination of everything musical that has brought us to this present day. With Hamish Glencross (VALLENFYRE, ex-MY DYING BRIDE, ex-SOLSTICE) on lead vocals and guitar, rejoined with old partners Chaz Netherwood (ex-SOLSTICE) on guitar, and Shaun Taylor Steels (MY DYING BRIDE, ex-ANATHEMA, ex-SOLSTICE) on drums. The line-up was completed by the addition of Rich Mumford of MALEDICTION on bass. They have a long and celebrated history of writing and recording together, and have been channeling this dark magic again, but with the added dimension of the extra experience gained over the years. Musically, creating crushing, apocalyptic doom metal, with the influence of the epic and the melancholy found in their combined past musical outputs.
Album lineup:
Hamish Glencross – vocals, guitar
Lee “Chaz” Netherwood – guitar
Rich Mumford – bass
Shaun “Winter” Taylor-Steels – drums
www.facebook.com/godthrymm
twitter.com/Godthrymm
www.transcendingrecords.com
www.facebook.com/transcendingrecords
twitter.com/transcendingrec