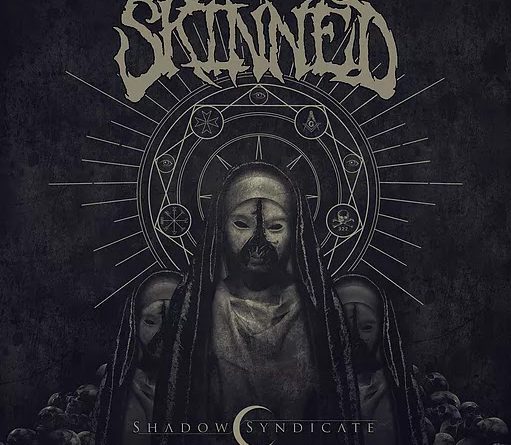 After more than 20 years at it, four albums and countless gigs and tours worldwide with some of the most recognized of their peers (KATAKLYSM, INCANTATION, DEFEATED SANITY…), USA’s SKINNEDare back with their brand new full-length, “Shadow Syndicate“, again produced by Dave OTERO(CATTLE DECAPITATION, CEPHALIC CARNAGE…) resulting in what’s definitely an ambitious and outstanding landmark release of the band’s discography.

Aside from the great musicianship and production, the mastery achieved here is the ability that SKINNED have to channel all of their inspiration, musically and lyrically, to create an atmosphere of doom and darkness throughout the album to create a fiery and fierce release that’s diverse yet coherent, dense yet atmospheric and all the while brutal and melodic at the same time.
Varied in shapes and moods, “Shadow Syndicate” (featuring among others guest vocals by Josh WELSHMAN (DEFEATED SANITY…) and guest lyrics by Paul McGUIRE (CEREBRAL BORE…), is the kind of work of art that’s much more than a collection of tracks: it’s a world in itself where each song explores a different aspect of dark beliefs (conspiracy theories, unsolved mysteries…), the whole creating a society of extreme darkness under the domination of the New World Order where the citizens become cattle for the governments and guinea pigs for alien entities, etc. ultimately leading our specie to its demise, the face under the merciless boot of the… “Shadow Syndicate“!

Below you can listen to the album in full below