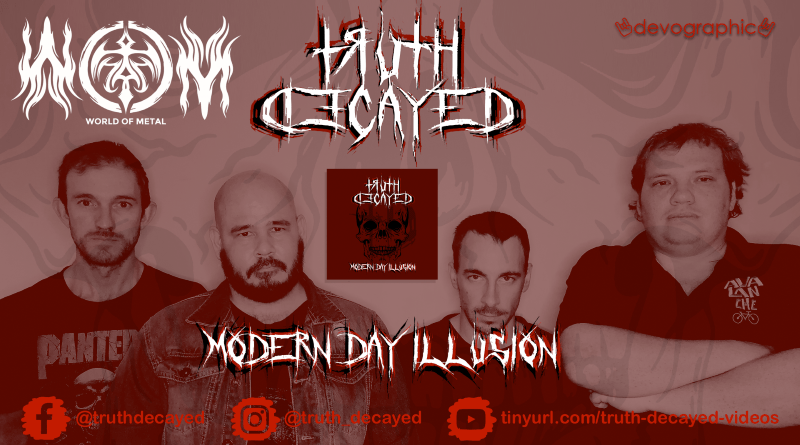 Truth Decayed is a newly formed thrash metal outfit from Durban (South Africa) and their releasing today their debut EP “Modern Day Illusion”. World Of Metal united the band to present the full album stream in a exclusive vizualizer.

These lads have seemingly come out of nowhere and has taken the Metal Scene by storm, raking in an African Metal Week Award with BurgStudio Radio, triumphantly earning a Band Battle Accolade with The Metal Lab in the UK and receiving international airplay for their debut single on various stations (and all this before their debut EP even released)!

Ryno Theron states that “the songs are made up from old riffs Warren and I wrote some years ago. Hearing our respective songs come to life has been an awesome experience, giving birth to the Truth Decayed sound, combined with the input from Johan and Brandon”.

​Guitarist Warren Jones comments that “I’m glad these songs turned out the way they did. Great bunch of guys turned these riffs into something unthinkable.”

​Drummer Brandon Carey adds that “It was really fun and interesting working with Ryno and Warren on these songs with Johan bringing in a fresh take on bass. The songs with every member’s different backgrounds in music influences shines through and gives a unique sound that I’m sure people will enjoy. Keep it brutal!”

Bassist Johan Maree concludes that “It has been an amazing trip so far to work with friends, making music we love. I look forward to the future and the experiences ahead.”