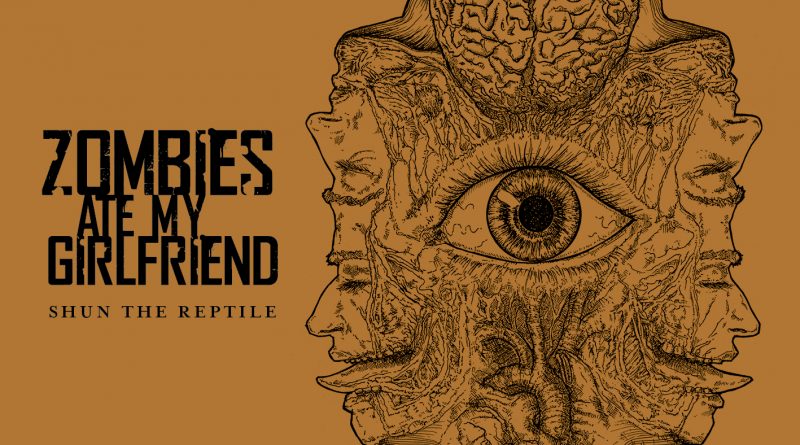 Cape Town’s metal titans Zombies Ate My Girlfriend have revealed the artwork for their new album Shun the Reptile.  Set for release on the 2nd November 2018, the album sees the band pushing the boundaries of modern metal over the course of 8 explosive tracks.

Guitarist Adriano Rodrigues comments on the idea behind the cover art – “The artwork sees us revisiting the artist behind our first release (Patient Zero), Brendon Barnard. As much as is possible we try to keep the entire production of our releases within a very tight-knit circle. We of course meet new talents along the way, but it’s always good to keep what works on board. We wanted to do a twist on the typical “amalgamation of gore” type of imagery, usually associated with your more extreme sub genres of metal. The theme is pretty obvious. Introspection. I guess there’s nothing wrong with demonic type figures ripping out the entrails of females, if that’s your thing. But it’s not our thing. The lyrics are some of the best we’ve done to date, and we wanted that personal theme to be represented visually.”

Album launch shows in Cape Town and Johannesburg will take place in November. Dates and details to be released soon. Established in 2012 and renowned as one of South Africa’s top metal acts, Zombies Ate My Girlfriend has enjoyed sharing stages with a slew of touring bands from abroad. Including, Protest the Hero, Darkest Hour, 36 Crazyfists, Monuments, August Burns Red, Unearth and DevilDriver. In 2016 the guys were crowned champions of the Wacken Metal Battle at the legendary Wacken Open Air in Germany, making them the first South African band to achieve this feat. South African album launch shows will take place in early November in both Cape Town and Gauteng, with a German tour planned for 2019.