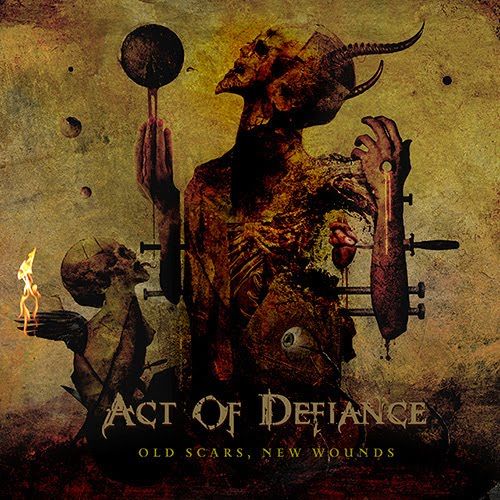 With their 2015 debut, ‘Birth And The Burial’, metal band ACT OF DEFIANCE – featuring Chris Broderick on guitar, Henry Derek on vocals, Shawn Drover on drums and Matt Bachand on bass – delivered a blast of pure and unadulterated metal that ignored fads and hit home hard. This year, the band returns with their sinister new album, entitled ‘Old Scars, New Wounds’, hitting retailers on September 29th via Metal Blade Records.
Now, you can watch a full performance video for the album’s intro track, ‘M.I.A.’below. The video was put together by Robert Graves (ashadowbeyond.com).
On ‘Old Scars, New Wounds’, ACT OF DEFIANCE has upped the ante. Each of the 11new tracks sound fresh and urgent while wielding a timeless quality that will connect powerfully with metal fans new and old – and there aren’t many contemporary bands who can make such a claim.
Naturally blending a plethora of metallic styles and never recycling ideas, ‘Old Scars, New Wounds’ is an even more dynamic and diverse collection than its predecessor, which was written solely by Broderick and Drover prior to recruiting bassist Matt Bachand and vocalist Henry Derek. With a fully-seasoned, tour-hardened band in place, there was room for everyone to bring something to the table this time around, and their varying styles helped shape the record.
The title – plucked from the blistering track ‘Conspiracy Of The Gods’ – stands as a metaphor for life in general, and the breadth of lyrical matter covered is as broad as the styles of heavy music found on the record. ‘Another Killing Spree’ looks at hardcore drug use, while ‘Lullaby Of Vengeance’ is an angry song about singing angry lyrics, and ‘Overexposure’ is an anthem dedicated to not selling out. There is also some very topical material, most notably on ‘Mis-Information Age’ and ‘Broken Dialect’.
“‘Mis-Information Age’ is very applicable in today’s social climate, where we can no longer blindly trust the source of facts that determine our view,” Broderick explains. “It asserts that we should be skeptical, making sure we have the truth and not someone’s propaganda, while ‘Broken Dialect’ conveys the idea that people can no longer hold a conversation with each other where their views differ, instead turning to sources that only support the view they want to hold on to.”
With every track featuring a blistering solo from Broderick, fans of his shredding can rest assured that the guitarist has not held back – though that was not his initial intention. “I actually wanted to tone it down a bit technically in terms of my solos, but the opposite happened! This was because I inadvertently ended up creating a few new techniques to use in my trick bag and saw their potential, so I worked really hard on the execution so they could make the record.”
‘Old Scars, New Wounds’ track-listing:
1. M.I.A.
2. Molten Core
3. Overexposure
4. The Talisman
5. Lullaby of Vengeance
6. Circle of Ashes
7. Reborn
8. Conspiracy of the Gods
9. Another Killing Spree
10. Broken Dialect
11. Rise of Rebellion
Going into writing the record, the quartet had no grand plan, and spread across the continental US, the individual members worked separately, bouncing demos back and forth and building on each others’ ideas. Like many contemporary bands, through taking advantage of available technologies they made a record that is very much a collaborative effort, despite the distances lying between the members’ home bases. Recruiting producer Dave Otero (Cattle Decapitation, Allegaeon) they tracked the record likewise, with Broderick laying down guitars in his own Ill-Fated Studios in LA, Derek and Broderick‘s vocals tracked at Red Light Studios also in LA, with Bachand tracking his contributions at Manshark in South Hampton, MA and Drover‘s drums were laid down at Atlanta’s Glow In The Dark Studios.
Having proven themselves on the road in support of ‘Birth And The Burial’ both as headliners and supporting the likes of Killswitch Engage, Hellyeah and Hatebreed, the band are looking ahead to the expansive touring that will accompany ‘Old Scars, New Wounds’, and their hunger to get back in front of crowds has not abated in the slightest. Upcoming touring plans are set to be announced very soon.
Support World Of Metal
Become a Patron!
World Of Metal Magazine – Agora Grátis/Now Free!
Buy CDs in our store