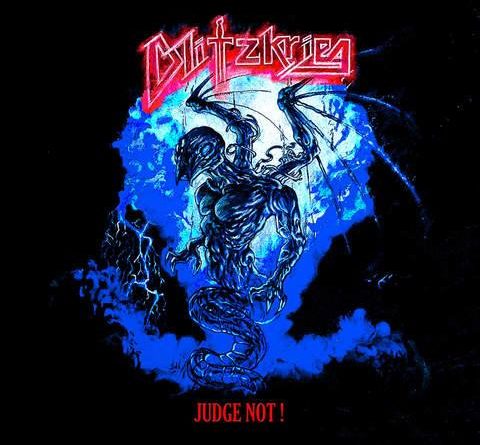 The pioneers of Heavy Metal – Blitzkrieg – strike back! Judge Not! is the newborn child of the mighty Kriegs after Three years since the release of ‘A Time of Changes: 30th Anniversary Edition’.

1. Heretic
2. Who Is Blind
3. Forever Is a Long Time
4. Reign of Fire
5. All Hell Is Breaking Loose
6. Angels or Demons
7. Loud and Proud
8. Without You
9. Judge Not, Lest You Yourself Be Judged
10. Wide Legged and Headless
11. Falling into Darkness
12. School’s Out (Alice Cooper cover)

Blitzkrieg was formed in October 1980 after signing a record deal with Neat Records, a label that was signing many of the bands involved with the new wave of British heavy metal (NWOBHM) movement. In the early stages of Blitzkrieg’s career they regularly produced gigs in England, but then later split in 1981.

Brian Ross most notably went on to join Satan, another metal band, along with stints in Avenger, Lone Wolf and Unter den Linden. In 1984 Ross and fellow founding member Jim Sirotto, along with guitarist Mick Proctor (ex-Tygers of Pan Tang), bass player Mick Moore (of Avenger) and drummer Sean Taylor (Satan/Blind Fury, ex-Raven) then decided that it was time to record the Blitzkrieg album that was originally planned to be released in 1981, A Time of Changes. It was later released in 1985. Blitzkrieg released 10 Years of Blitzkrieg in 1991. The released Unholy Trinity in 1995. The album Ten was released in 1997. The Mists of Avalon was released in 1998.

Ross was then involved in a car accident, which temporarily kept Blitzkrieg from playing. After he recovered, the band released the albums, Absolute Power (a studio album), Absolutely Live (a live album) and Sins and Greed. On 10 August 2007, Blitzkrieg released their album Theatre of the Damned through their record label Armageddon Music.

Blitzkrieg is the seventh track from Metallica’s 1998 album Garage, Inc. second disc. It was written by Ian Jones, Jim Sirotto and Brian Ross, with a length of 3:36. Originally released by Blitzkrieg in 1981 as a B-side to the “Buried Alive” single, Metallica had already released their version on 1984’s “Creeping Death” single (aka Garage Days Revisited). Metallica have played this song live 82 times. The first time was March 14, 1982, in Anaheim, CA.