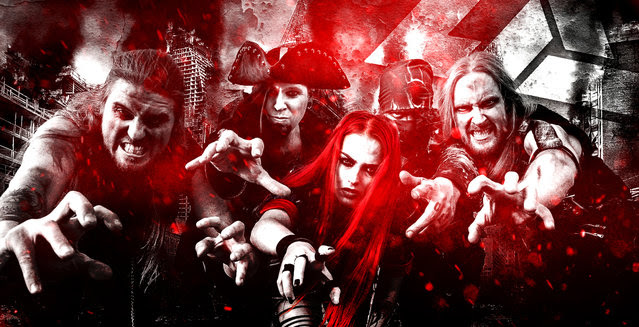 Forget everything you thought you knew, because FOLLOW THE CIPHER are ready to herald in a new musical era and crash through the dimensions of our universe to steal your breath. Despite their stylistic diversity, the Swedish metal act from Falun creates a very cohesive ambience, mixing a first class sound with magical charisma, an innovative concept, live presence and an incredibly talented singer.

FOLLOW THE CIPHER will finally release their self-titled debut album next Friday, on May 11th, through Nuclear Blast. Its cover artwork was created by no less than SABATON‘s Chris Rörland.

After revealing a string of album trailers, it’s time to unveil another track from »Follow The Cipher«. Check out ‘A Mind’s Escape’ below:

Guitarist Viktor Carlsson commented:
“The track portrays the thoughts of someone who has realized our human mistakes. The only way to survive the circumstances is to picture the never ending beauty above the clouds. That’s a mind’s escape.”

One of Scandinavia’s most promising melodic metal and hardcore bands, Halcyon Days, releases their first single & music video “July” today! The track is taken from their upcoming album “Rain Soaked Pavements & Fresh Cut Grass”, to be released on June 15. With its beautifully melodic lines, aggressive vocals and drums that follow the heart-rate of the song’s narrative, “July” presents a reminiscence, and a reflection on past events and feelings. It is an expression of inner turmoil, balanced out by the moments of hope and determination. The band has commented: “‘July’ is about the summer we started writing the record, events and thought’s from that time and the whole feeling of trying to find one’s place in the world.”

Canada’s finest hardcore/punk outfit, COMEBACK KID, have released brand new music in the form of the 2 track single »Beds Are Burning«. The single includes the band’s cover of the MIDNIGHT OIL classic, as well as previously unreleased track ‘Little Soldier’ which came together during the »Outsider« sessions. Make sure to watch the visualiser for ‘Beds Are Burning’ in its full length, here:

Download or stream the digital version of the release via this link:
http://nblast.de/CBKBedsAreBurning
Listen in the NB Novelties Playlist:
https://open.spotify.com/user/nuclearblastrecords/playlist/6aw9wiedFzzhJiI96DhNhw

A limited print run of 500 7″ vinyl will be (mainly) available on tour from the Australian dates onwards. See the tour schedule below.

Commented singer Andrew Neufeld: “We recorded the ‘Beds Are Burning’ cover on a whim, while recording our last record. I saw the video at a bar and it got me inspired to text and try to convince the band into doing it. It went over well so here we are with a new cover and another new song called ‘Little Soldier’ which I thought might have more legs if we released it as a single as opposed to a track 9 on a full length. Its a bit of a different vibe for COMEBACK KID and a song that I had a lot of fun writing. Our label is putting it out digitally and we pressed the 7 inches so for the first time CBK have been pressing our own music. Limited to 500 copies and only selling live and maybe through a couple of friends. We’re playing it by ear if we will press more. This was a fun collaborative project.”