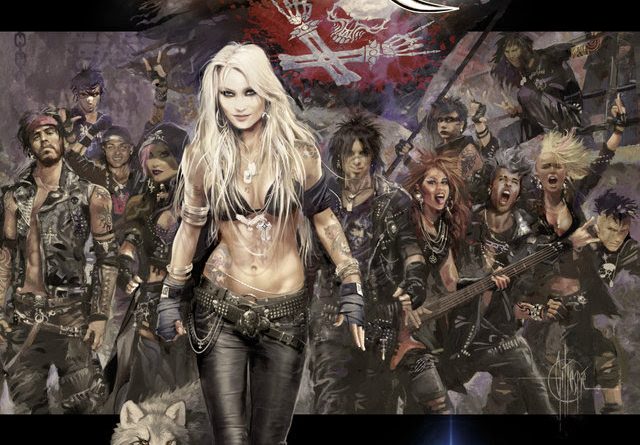 »Forever Warriors, Forever United« – 100 days to go until the release of DORO‘s highly anticipated new studio album. 100 days of waiting until the metal queen unleashes 25 (!) brand new songs, her first double album ever, upon the music world. But »Forever Warriors, Forever United« isn’t simply just a double album – it’s two new DORO records as one, which will be released as premium 2CD set and vinyl formats on August 17th, 2018 through Nuclear Blast.

On »Forever Warriors«, DORO channels her inner wild warrior, with tracks like ‘Bastardos’ or the first single ‘All For Metal’ (release: June 8th) affirming this. Her duet with AMON AMARTHfrontman Johan Hegg ‘If I Can’t Have You…’ is sure to bring any metal head to their knees. This is DORO like you’ve never heard her before!

“We’ve been touring a lot during the last years. We collected a lot of impressions and got to meet many amazing people. That inspired me enormously,” explains DORO. “The songs and ideas simply bubble out of me. That process didn’t even end while being in the studio. We had 50 song ideas in the beginning which turned into 14 concrete album tracks. Suddenly we had 20 songs, and in the end it was even 24. I also wanted to record ‘Caruso’ in the last recording week.”

This unique song writing marathon was based on ‘Living Life To The Fullest’ back in January 2016. Says DORO, “I was flying to Lemmy’s funeral when the track’s melody and lyrics suddenly came to mind. Lemmy was always very important to me. Everything went quickly from this point. As soon as a song was constructed, I headed to the studio – between all those shows and tours – to capture the freshness and live energy of the new tracks.”

The result is 25 songs in the form of two fantastic albums, showcasing all of DORO‘s wonderful and varied facets. »Forever Warriors, Forever United« is another huge chapter added to her long history.

The album cover artwork was once again created by DORO‘s favourite artist, Geoffrey Gillespie. It portrays DORO in the middle of a swarm of wild metal heads exuding attitude, power and positive vibes. “The cover and the title form a perfect unit,” DORO explains, “Just as it should be. It all fits perfectly in line with the songs, which also deal with some political themes.”

DORO continues: “On »Forever Warriors, Forever United«, there will be a lot of big rock heroes. Fans might be curious about the many awesome guest musicians involved. There are some big anthems on both albums, countless heavy songs, as well as heart-warming melodies! The records are supposed to give you power and thus contain a lot of energy.”

The first single ‘All For Metal’ features several metal heroes, who can also be seen in the upcoming music video, which will be released on June 8th. The list of guest stars will be unveiled soon… and DORO is already convinced that “‘All For Metal’ is going to be the new ‘All We Are’!”

Guitarist Doug Aldrich (WHITESNAKE, DIO, DEAD DAISIES) and former WARLOCK guitarist Tommy Bolan, who also contributed to the highly acclaimed album »Triumph And Agony« in 1987, will also be part of the new album.