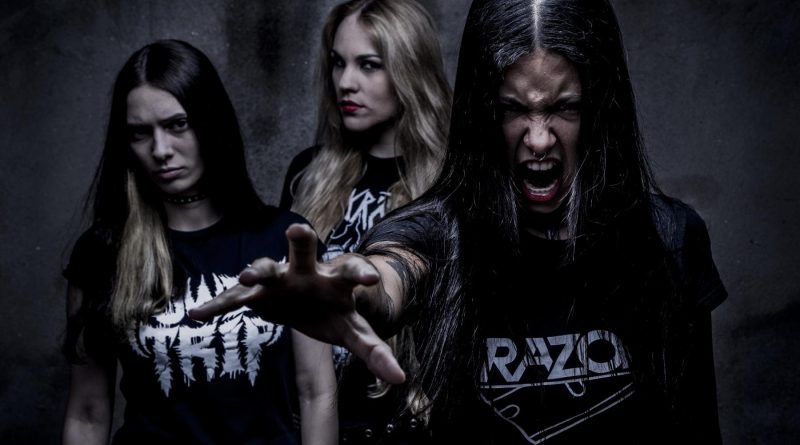 Brazilian thrash commando unit NERVOSA is synonymous with raw aggression and untamed power! “Downfall Of Mankind”  is the upcoming masterpiece by this outstanding combo which will be released on June 1st via Napalm Records.  Now a new song sees the light of day: Please get ready to “Kill The Silence”!

Guitarist Prika comments on the new song and video:
“A perfect scenery to compose lyrics that encourage overcoming. It talks about things that hurt you and that you’re not alone. This new video symbolizes a new phase in the band with which I identify myself 100%!

“I like the idea of using fire in the video, because i think the symbology has everything to do with the message in the song. Fire represents renewal and mainly purification, and using it in the video really gives me the idea of triumph, overcoming and moving on!” adds Fernanda.Watch “Kill The Silence” below:
The video is again directed by LURINGA, the same company that produced “Hostages”!
PRE ORDER DOWNFALL OF MANKIND HERE!
Available as CD Digipack & Gatefold LP

ZARPA has released a video for the song “Buscando Un Nuevo Mundo”. That song is on the album “Dispuestos Para Atacar”, which was released on 3rd June 2016 via PURE STEEL RECORDS. The album is available as CD and Download.

Crime Records has released the official video for “Redux (Coming Home),” a track from IRON FIRE double-album Dawn of Creation: Twentieth Anniversary. Check out the video below:

Dawn of Creation: Twentieth Anniversary, which includes a special collection of demos, live tracks, covers, and three new songs, was just released on double-CD Digipack and digital formats. The album can be ordered through shop.crimerecords.no/.
The label released the following statement concerning this historical metal document:
“So now it’s been twenty years since five young guys from the Danish country side decided that power metal should be the first step on their quest to glory. The name Iron Fire came up and carved in stone that these Danes meant to be real, and despite their young age, forge catchy power metal rooted in the classics of Helloween and Running Wild. As the journey continued, ups and downs turned and reformed the band into the trio of today. And now that trio is looking back, and in their wish to celebrate 20 years of power metal, a selection of demo songs has found its way to a double album. Along with three brand new songs Iron Fire provides old songs in the original pre-album versions as well as previously unreleased material. This is the raw and pure, from the heart of Iron Fire. Enjoy!”
Track Listing:
Disc 1
1. Dawn of Creation
2. Redux (Coming Home)
3.The Other Side
4.A Token of My Hatred (Cover)
5.King at Any Cost (Demo)
6. This Kids (Cover)
7. Kill for Metal (Live)
8. Slaughter of Souls (Live)
9.Final Odyssey (Live)
10. Among the Dead (Demo)
11. Tornado of Sickness (Demo)
12. Still Alive (Demo)
13. My Awakening (Demo)
14. Enter Oblivion (Demo)