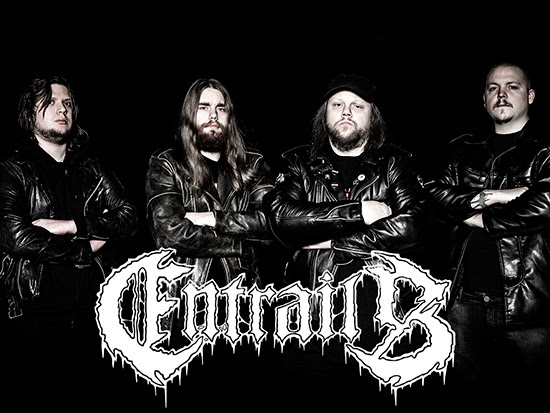 Swedish Death Metallers ENTRAILS are announcing the departure of singer/bassist Tommy and drummer Martin from the band. Both have chosen to leave ENTRAILS to have more time for their jobs and other bands. The remaining members Jimmy and Penki didn’t waste any time and have recruited new members to make sure not to miss any shows and keep the ENTRAILS train rolling! The new maniacs in the band are Freddy Ortscheid on drums and Marcus Brorsson on guitars and backing vocals.

Freddy is known for drumming in bands as Still I Wither, Magic Kingdom and Omnicide among others. Comments Freddy: “I can proudly announce that I’m now the new official drummer for Entrails. I am both honored and exited for this – let the mayhem begin!”

Marcus is known as a Guitarist in Soma and Omnicide and comments as follows: “I’m really psyched about joining Entrails and getting a chance to spread some old school swedish death metal to the world. All for the sake of keeping it brutal.”

Penki Samuelson will switch from guitars to main vocals and bass. This will bring back the sound to a more old school feeling.

Jimmy Lundqvist comments: “I know it’s not optimal to change members, but when people leave new guys had to be found to keep the band alive. With these new and damn good musicians onboard we shall continue to spread the same old school feeling Entrails stands for!”

Penki Samuelson: “Markus and Freddy truly bring a new dimension to the band. Everything fell in place at first rehearsal and it sounds great and feels amazing!”

ENTRAILS will further on book their shows via “Black serpent promotion” and themselves. Just drop your interest in booking at black-serpent-promotion@gmx.de or via the band directly at entrailsreborn@hotmail.com for further discussions/booking.