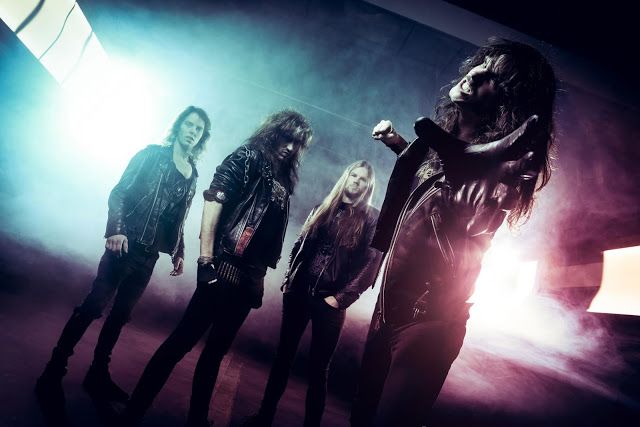 EVIL INVADERS are back!  After touring extensively all over Europe in support of their highly acclaimed debut album Pulses Of Pleasure (2015) and their intense follow-up EP In For The Kill (2016), these Belgians have managed to capture the ultimate collection of fucked up adrenaline and compressed violence onto one record! Their second monstrosity of an album is called Feed Me Violence and today release date, track listing & album artwork has been unveiled!
Joe & Max state:
“We went through hell for this record but I think we really nailed it on this one. We spat out all our frustrations into this album which will be quite noticeable when you listen to it. This is quite angry shit and out of control. “Feed Me Violence” will be a whole new chapter for EVIL INVADERS as it unveils new and quite unexpected sides of our music. Going from fast brain-bashing riffs to slow and clean, almost theatrical compositions. This album will take you on a dark trip through pain, vengeance and insanity!”
Wasted and wild, lightning-swift and erratic! Prepare yourself for massive divebombs and a grim beating snare drum! Feed Me Violence will be released worldwide on September 29th via Napalm Records! This release will pump up your blood veins and guide you through a relentless and twisted journey which every extreme Metal music fan should and will relate to. A must have for fans of Death, Slayer, Kreator and Judas Priest’s Painkiller! Check out album artwork and track listing below!