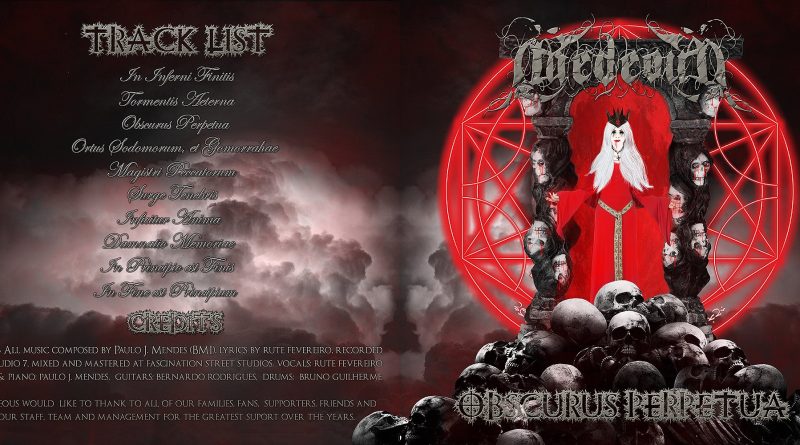 CAEDEOUS  anounced today that the project moves into a new phase of existence. The band announced that they’re going to studio once again for the recording process of their second album of originals which will be entitled “Obscurus Perpetua” with a total of ten tracks. The album will be produced by Paulo J. Mendes and recorded on Studio 7 and the end product will be mixed and mastered on Fascination Street Studios, and it is expected to be released digitally and physically in the end of November of 2018.

The album itself in terms of sound will follow a different approach to the already sound we previously estabilished  in the year of 2017 with our previous albums “Orchestral Sessions: Domini Tenebrarum” and “Domini Tenebrarum”, since it will be darker, heavier and crazier in terms of the musical concept. Above you can see the artwork and below the tracklist of the album:

Paulo J. Mendes: “…This new album Obscurus Perpetua, marks a new chapter in Caedeous history not only as a departure from old musical themes but to embrace a new type of sonority, more complex, more mature, and darker. It will show a natural evolution from everyone involved in the project to a new staging ground however due to the nature to what is already composed and being brought to the studio for recording, the sound is crazier than before… in my perspective it will be a album that you will simply LOVE or HATE… no middle terms in between, however since i always have been stating in interviews, we are doing art and art needs to have absolute mental freedom, be original, and the more important is to make good music that we feel confortable with, without fear of embracing things that were never done in the metal genre, and that is exactly what we are at the moment…”

Rute Fevereiro “…These news songs from Obscurus Perpetua, are so emotionally powerful and dark that I found myself living new unknown feelings through them. I’m sure I’ve never sang nothing like this before. It’s overwhelming! When you work with commitment and all of your heart and soul, you an expect results, and Caedeous is so inspiring for us that our emotions will get through you for certain…”