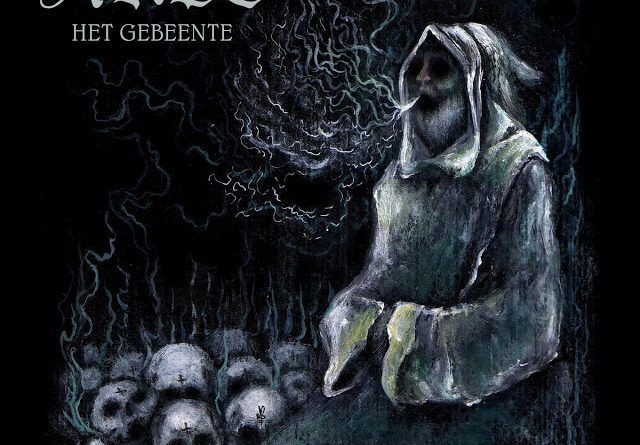 One-man-bands are still a clichet in the black metal world but that don’t really matters when the sound is so great as it happens with Ande’s “Het Gebeente”. With a great set of songs where the atmosphere rules, it didn’t take much for us to get addicted to it. So that we could know a little bit more about Ande, we challenged Jim, the man behind Ande, for a few questions. – Fernando Ferreira

WOM – Your latest album “Het Gebeente” show us show black metal
can be melodic and yet grim and fierce. What do you think of the opinion that
the genre shouldn’ have melody?
Jim – I actually consider black metal to be the most diverse metal
genre. There’s all these different bands with their own influences and sound.
You have great bands like Ildjarn, Blasphemy, Beherit, … with the more
monotonous sound. But there’s also the really melodic bands like Dissection,
Wode, Mgla, … And everything in between. Thrash metal for example isn’t that
diverse musically. That’s one of the strengths of the black metal genre in my
opinion, and there shouldn’t be any rules or an elite setting them. So I don’t
really share the thought that there’s no place for melody. By the way, speaking
of Wode, I went to one of their gigs with some friends yesterday, that’s a
tight live band, they put on a great show!
WOM – Ande is your solo project. What kind of background do you
have with black metal? And how did came up the desire to create Ande?
Jim – Well, I’ve been listening to black metal since the early
90s. It must have been a bit after Darkthrone released ‘Under a Funeral Moon’.
Before that I was this death and thrash metal kid. I instantly liked the
rawness and the atmosphere when I first heard ‘Natassja in Eternal Sleep’. I
listen to a lot of different music styles and bands, and black metal has always
been the constant. Over the years I’ve played in a few bands as a bass player,
but Ande is the first time I’m playing black metal. The idea of creating black
metal music has been in my mind for a long time, I just was missing the time
and experience to create and record music.

WOM – Although we know that you are influenced mainly by classic
BM acts (mainly Scandinavian, I think), your sound present us more influences
than those. Where do you gather the inspiration for the more melodic and
atmospheric parts of Ande’s music?
Jim – Indeed in the early days I was mostly listening to the
classic Norwegian bands, because those where the most important ones back then.
But the genre has evolved a lot, and I’m evolving with it. The last few years
I’ve been listening to a lot of post black metal too. Altar of Plagues, Ash
Borer and Fell Voices were really important to get my hooked on that subgenre.
There’s a lot of cool post black releases coming out all the time. Last year
for instance you had very good albums from Nevoa, Blodstrupmoen, Ultha,
Downfall of Gaia and With The End In Mind, just to name a few. Apart from that
I listen to a lot of rock and electronic bands too, I guess those influences
also get into the music I make.

WOM – Do you believe that your music should be interpreted by
each listener on their own or is it important to you that the message and the lyrics
should transmit the thoughts and feelings that you had?
Jim – I’m not really sending a message, more trying to create an
atmosphere and generate a feeling I  get
when I listen to something I like. But everyone should judge on their own how
it makes them feel. With Ande, the music is also more important than the
lyrics. That’s one of the reasons I’ve chosen not to publish them.

WOM – You make music on your own, and you release it in the same
way. Do you think that’s the best way to protect your art?
Jim – Ande is currently a solo project because that’s the most
convenient way of working on this for me. I can try everything I want, make it
sound the way I want it and set the image I want. That
does also provide some limits of course, as I’m not a very experienced singer
or drummer for instance. But so far I’m happy with the result, and the comments
I’m getting. For future releases I will be looking around for label or
distribution support. ‘Het Gebeente’ is also up for a tape re-release on the UK
Blackwood Productions label. They have some very good releases on their roster.
And you do get some more coverage that way, reach more people that are open for
your music. As far as protecting art, I’m open to all kinds of ideas, but I
wouldn’t do stuff I’m not happy with just to get an album deal of course.
WOM – Do you ever consider to make Ande a real band and play
live?
Jim – Sure, should an interesting offer come up. I have a lot of
friends that already expressed their interest in joining me. Actually the
inital idea I had for the project was to do it as kind of a Black Metal
Community. I would create, record and release an album. Afterwards assemble a
temporary band to rehearse the tracks, alter them here and there with
everyone’s input, and do a few live shows. Also releasing the live version of
the album. It would be interesting to hear the difference between both
versions. Band members could change with every release, so nobody except me
would have to make a long commitment. Now that I’m talking about it, it does
sound a bit like the way Ghost works (laughs). I dropped the idea because the
first release was not long enough for live shows.
WOM – What would be for you, as a musician, a life-time
achievement?
Jim – With Ande, nothing spectacular really. Just create some more
albums, get a decent label deal and play a few cool live shows. Maybe get on
Radio Fenriz too. He seems to be keeping an eye on the worldwide underground.
What would be even better would be to bump into him in a pub, and just have a
few beers together while talking about music. I also play in a death metal
outfit, one of our aspirations is to get on the Obscene Extreme festival, that
looks like fun.