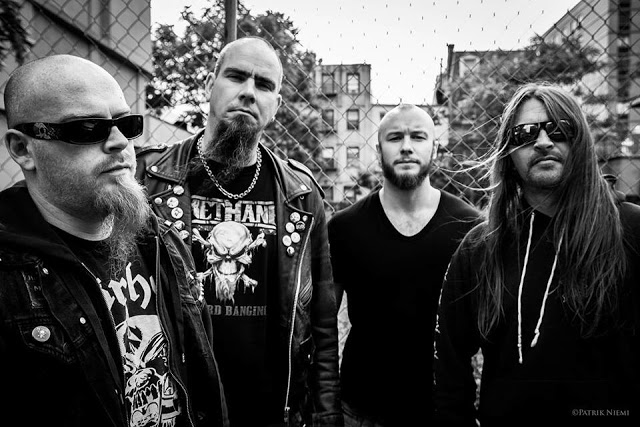 Methane‘s debut album (check ou our review here) blew us off. Having typical american southern rock/metal coming from Sweden isn’t something you’re used to listen every day. Specially when it’s so well done. But there’s a catch. They wer founded by Tim Scott, a well known name of the U.S. Death Metal scene. Confused? Have no fear, Tim is here to guide us to the world of Methane.

WOM – Hi there! Congratulations, “The Devil’s Own” is a great album. How have been the reactions to it so far?
Tim – Thanks! Thanks alot! It’s been getting some really great reviews, it’s a satisfying feeling, and the album is getting alot of support from the metal underground. That’s really what it’s all about, metal family.
WOM – How do you consider yourselves, a swedish band, an american band, a swedish/american band?
Tim – You know I haven’t really thought about it. I guess technically we are Swedish band since we all live here in Sweden. But Methane’s music isn’t a typical Swedish metal sound.  It kind if sets us apart here in Scandinavia, we have alot of support from music fans and people commin’ to shows, but the media doesn’t seem to know how to react here.
WOM – I ask you this because we can say that you have a typical american sound (from the south of the U.S.A.) and although it’s been usual have some scandinavian bands to play that kind of sound. All four of you have the same love  for that kind of sound, the same influences? If so, it kinda explains the reason there have been no changes in your line-up, right?
Tim – Yeah, well that’s kind of true. I mean the thought behind starting Methane was to have fun and play with more feeling, metal with alot of groove and bounce, beard banging music. Our brother Andreas had to unfortunatly leave the band recently, he couldn’t commit to the touring and time that we need to put into the band. We found Olle Ekman , lead singer from Deals Death and he toured with Amaranthe singing as well. Turns out he is also a killer drummer. Olle is already writing the next album with us.
WOM – Plan to tour a lot to promote “The Devil’s Own”? In Europe or also on other continents?
Tim – We live to play live man, the embers of a U.S. tour is in the fire right now and we have dates chiseled out for Finland in June already. We’re game for what ever comes our way.
WOM – How do you see the metal scene here in Europe comparing to the scene in the U.S.? Is it easier to live from music here – don’t know if you do that, but that’s a good question also.
Tim – Making a living from it? I don’t know about that , but musicians get more respect here in the EU (from promoters) they understand we do a job. But there are pirates everywhere who want bands play for free, bring people to there club to spend money. Ah, I’ll just go off on that subject and start ranting.
WOM –  You come from a death metal past and now is playing southern metal. Do you think is possible Methane to incorporate some of more extreme influences?
Tim – (laughs) ehh .. we have actually scraped alot of good death metal riffs during our writing, been there done that. Of course it is an influence but more the attitude and the agression. I really don’t want Methane to get caught in any specific genre , we try to keep our writing somewhat dynamic.
WOM – Great riffs, great solos and a great album. There was a time that would be enough to get noticed, but nowadays it seems that have to rely more on gimmicks and social networks to get your music around. Do you miss the old days, those simpler times?
Tim – Yeah now, social media is flooded with bands and music. I’m not real in to gimicks, I think I’m kind of old school that way, metal for me is denim and leather , bang that head that does not bang. But it’s hard work , making lots of friends and taking care of your metal brothers and sisters goes along way.  In that way it’s really the same , a community. Otherwise tape trading and snail mail , I don’t miss a bit. It’s evolution, I welcome it. We musicians need to learn to adapt like cockroaches living through the ice age. I wont lie man, we still use some old school techniques like handing out flyers at shows that kind of stuff.
WOM – Once again “The Devil’s Own” is a great album and a great debut. Do you feel that it shows Methane’s identity developped or just a starting point for a constant evolution?
Tim – I think its a good representation of the music we want to make. There is no plan or blue print. Just want to write and play metal, I hope it makes you want bang your head, raise your fist and start a pit in your livingroom