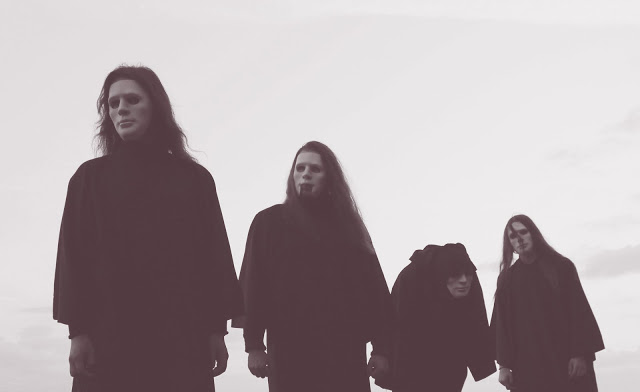 Below The Sun are set to release their second studio album, Alien World, via Temple of Torturous this May. The Russian four piece return with another progressive and atmospheric record that is as ambitious as it is heavy.
“Alien World” is based on the science fiction novel “Solaris” by Stanislaw Lem; a 1961 tale that explores the nature of human memory in the context of complex communications between human and non-human life forms. The non-human life form that is at the centre of the story in “Alien World” is an oceanic planet which is capable of bringing human memories into a physical form. The pelagic themes explored within the music on the album continues into the artwork, which depicts an alternative view of the ocean.
The album was recorded at two different studios in the band’s home town of Krasnoyarsk, Siberia. No synthesisers or samplers were used during the recording; all sounds were made by guitars, bass, drums and vocals, with some later processed by effects pedals. The band has built layer upon layer of audio explorations, with clear overtones of black metal in the bleak soundscapes, oppressive doom, and swirling, atmospheric metal.
With inspirations ranging from Pink Floyd to Khanate, Jimi Hendrix to Ahab, the influence of such bands is at times obvious, and at others no more than a subtle nod. The results leave the band hovering between genres, but no worse of for it. Choosing not to focus into what sub-genre they’re most suited to, BELOW THE SUN instead focus on expressing the depths of human emotions via their music.
Alien World track listing
1. Blind Ocean
2. Mirrors
3. Giant Monologue
4. Dawn For Nobody
5. Release
6. Dried Shadows
7. Black Wave
8. In Memories
Alien World will be released on May 26, 2017 via Temple of Torturous Records.