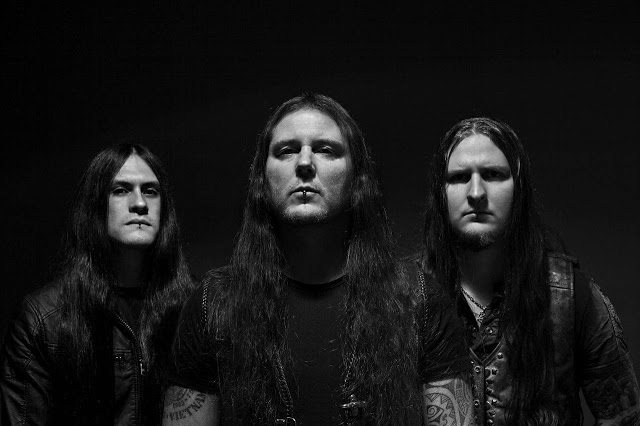 Nargaroth doesn’t need any introductions. One of the top black metal acts not only in Germany but in the entire world. You might not like it or even agree but that’s a fact! And talking about Nargaroth is talking about Ash, you can’t dissociate one of another. With his eighth album (we thought it was his seventh but Ash corrected us) ready to be unleashed, we approached Ash for a great talk that you can check out below.
WOM – Welcome back Ash! Nargaroth didn’t release anything in eight years… why the long wait?
Ash – I have to correct you here. The last album was released in 2011, which makes six years between this and the new album. Only because I worked with another musician, doesn’t mean it is anything less than a NARGAROTH album. Only because outsiders give that album a different label doesn’t mean their opinion correct.

Between 2011 and now I had two other nargaroth releases. For one  the release “Rasluka” Unity in 2011, that combined the two Rasluka MLP’s. For another the live album and DVD “Black Metal manda Hijos the Puta”  in 2012. Things, like the creation of an album (should) take time. Especially when it is supposed to have a deeper meaning. As I express through my albums personal encounters and experiences, the actual album had to wait until the time was right. To often bands make a annual or a two-year rhythm in their outputs and quickly lacking in substance. By this they follow and fulfill the nowadays trend of valueless creations that you find in all walks of life and manufacturing.
WOM – Did you felt some kind of pressure for “Era of Threnody” and what is, in your opinion, the main difference between the new album and “Jahreszeiten”?
Ash – There was no pressure. I took my time. The main difference is that other and new experiences and life events are the origin of the albums content and atmosphere. What I dealt with on “Jahreszeiten” was closed when I finished the recording. New life experiences where ahead and their act of processing is described on my new album “Era of Threnody”.
WOM – Nargaroth always have been a kind of “love it or hate it” entity. Do you take the reactions to your sound in personal way or by now you’re already immune to it? I guess in some sense, it’s important to you to reach your audience with your art…
Ash – No one like to be bitched at about everything you do or don’t do. Those BM musicians who claim they don’t care are either trash talkers or are simply hailed by all sides and just play the not caring outlaw. I have seen the latter many times in BM when quite famous and celebrated bands “impressed” the masses by their tamed rebellious statements. Its easy to say you give a shit, when you get supported from all sides.

Sometimes the bullshit that get spread about me bugs me, sometimes it don’t. I simply try to ignore it what not always works. Either someone brings it to your attention or it hits you in your personal life because some brave cockroaches reaches anonymously out to your privacy. That’s annoying. Especially when its all about stuff they just invent and simply lie about and you have to justify for this crazy allegations. But this happens when you reach a certain popularity and you have to learn to deal with it. Otherwise you will simply fail and you were too weak to withstand what it takes. I don’t wanna sound stupidly hero and badass, but that’s whats going on and what you have to do.

Musically I always did what I wanted to do despite of expectations and the actual common sense and taste in the scene. I am too old to care about this fickle music society that every year demands something else. I just want to be left alone in my privacy. That’s why I’ve chosen to live away from most people.
WOM – Twenty years of Nargaroth. What are the most notable changes in Nargaroth, in yourself and in the black metal scene in general?
Ash – I got older, so did change my musically approach to my own creations. The scene is fucked up beyond all recognition. Just as it was 10 years ago.
WOM – You said in the past that you didn’t believe anymore in the existence of God or Satan and misanthropy was a big part of Nargaroth’s concept and your personal philosophy. Can you tell us that was there any changes in these issues? What’s the concept behind “Era Of Threnody”?
Ash – I am atheist but cant deny that once in a while I wish for something bigger. I think it doesn’t have to be a god or whatever. Just find something bigger than you and you an be fine. In the albums booklet I write to the background of the album itself: Each stage of one’s life has its very own struggles, temptations or aberrations and most of us feels a longing for something. Something that heals or fulfills our life and sometimes leaves us in despair. The events, whose overcoming process is reflected in this album, drove me into a self-imposed nomadic lifestyle, which took me around the world – homeless, aimless. In brief periods of pause, I lived in rural volcanic regions of Mexico and in the seclusion of Canadian Indian reserves, where the lyrics to this album were written.

My personal notion is that there are only few musical forms of expression with a masculine temper in their emotional quality that I find appealing. Since I consider a traditional archetype of Flamenco one of these few expressions, I have been following up to the idea of incorporating it into my music for quite a while. But the necessary high level guitar skills have prevented its realization for a long time. When I did a concert in Paris in 2013, I mentioned my idea to Bernth, who – among other things – was studying Jazz guitar at a musical academy in Vienna and belonged to NARGAROTH´s live lineup. Later, when – independently of each other – both of our lives’ familiar orders fell apart we joined to realize this project. Original flamenco, being the music of nomadic, homeless and rural people, merged seamlessly into my life story and the history behind this album.

It took me well over a year to overcome my mournfulness and the background factors that led to the events occurring in 2014/15 and to take control of my fate again. During times of emotional uproar, my creative abilities are limited, because melancholy – which I completely succumb to – takes full control of me. I only try in hindsight to find out how to put my experience to music, which is why this album is two years late. All of the songs refer to actual experiences and events mostly having taken place in Las Vegas and the Mojave Desert.
WOM – Do you keep updated of what’s being done lately in the black metal scene? And how do you see all this post-black metal stuff?
Ash – No. I haven’t put any interest into this since the years 2000/2001. I personally do not care nor do I listen to any Black Metal anymore besides some of my old favorites once in a while, due Black Metal is too contaminated to me. Listening to Black Metal reminds me of its demise and that – to me – is something pretty torturing as the art itself is very dear to me. If I do listen, what is so rare that its not more than maybe 4 or 5 times per year, to some old favorites of mine, then it brings aching memories and the knowledge what Black Metal has become. That aggravates too much. And new stuff doesn’t interests me at all. No matter if it is considered as legit or faggy by the scene. I have my opinion, I keep it to me and I don’t participate on any Black Metal scene circus anymore. I listen other things anyway.
WOM – What are your plans to tour in support of “Era Of Threnody”? Care to take it far and wider possible and selectively choose the shows to do?
Ash – There is a European Tour with ABSU and HATE planned in May and June this year. Maybe some dates in Canada too. That’s it. I have to put my life energy into more important and real-life related matters
WOM – Thanks for your time, any final words?
Ash – New album will be released on 16th of May via Inter Arma Productions and will be available through all our distributors as well as in digital format. Keep it Metal – Semper Fi
www.nargaroth.de
Interview arranged by Sónia De Almeira Lopes Molarinho Carmo