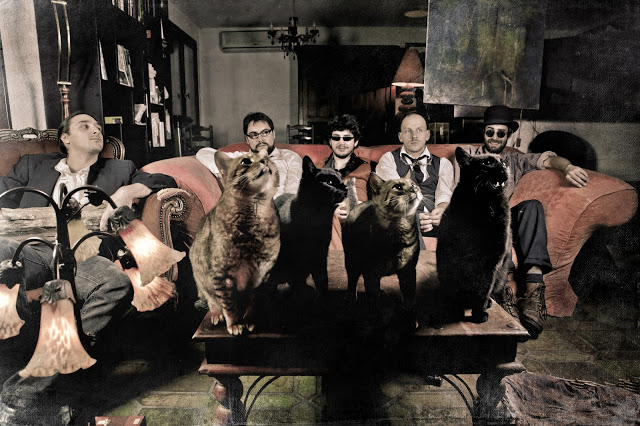 Pryapisme is a name that all that like experimental music should get to know. Specially because they have a modus operandi that isn’t what you would expect. And they also mix a load of different genres and serve them on a single plate. We had to know if they were from outter space or just the regular next door neighbour – or if they are our regular next door neighbour that actually is from outer space and like to get high. For our surprise they were pretty chilled and cool guys. Here’s what they had to say. WOM – Your sound is quite allucinated. I bet that comes as a compliment, right?
Pryapisme – Yes, indeed, we are happy when our music provokes big reactions for our audience. We don’t do drugs but the music is meant to be like a trip for the listener. If people find it allucinated, colorful, cinematographic or whatever, that’s ok for us.
WOM – What is the purpose of Pryapisme as an musical entity? To experiment or simply to be defying?
Pryapisme – There’s no particular purpose in the band. Just making the music we all like. We don’t try to be defying but of course we experiment to crush new musical boundaries. We all listen to almost every possible music styles, we are fed with it and it’s natural for us to use all those sounds and influences within our own music. We don’t consider that we are big experimenters, we are just open-minded with our musical tastes, and we don’t want to reduce the band in a traditionnal project with a single aesthetic.
WOM – How do you see yourselves in the future? Where do Pryapisme will travel? To a more electronic sound or a an organic one?
Pryapisme – I can’t tell you for sure now what it will be like. Of course we want to play live the more possible and defend our new album on stage. The next opus of Pryapisme will be for sure a music for a videogame that we will annonce soon. We also have some ideas for concept EPs but we will take our time. For now, we focus on live gigs.
WOM – What kind of influences do you have to make such a experimental work?
Pryapisme – The main influences come from the bands “Mr Bungle”, “Estradasphere” and “John Zorn” that we all listen when we were younger and still these days. We also take ideas and influences from videogames, movies and books. And of course from almost all musical styles : classical, metal, rock, electronic, oriental, latin, African… Our music is also fed with philosophy, psychology, Internet and animals (specially cats). It’s really a big patchwork.
WOM – How have been the reacions to “Diabolicus Felinae Pandemonium” so far?
Pryapisme – For now, the reactions have been really nice. A few people don’t like our extreme way of composing and structuring our tracks but that’s (been) the case from the beginning. Some people prefer our old album and some think that this one is our best. It’s normal that our music divide people but most of the feedbacks we have for now are really great.
WOM – Do plan to play live or is this a type of sound that it’s best suited to listen in the record?
Pryapisme – We definitly plan to play live, the most possible. We just made our first show with some of the new track from the new album and we are very happy to play thoses new songs. Like always, our live tracks are very different from the studio ones. It’s a choice that we always have. Seeing the band live is really another experience. We try to propose alternative versions, with different sounds and structures, in a more catchy way. The album is more visually-orientated, the live shows will be more rock’n’roll (traduction : with more false notes but with sweat and drool).
https://pryapisme.bandcamp.com