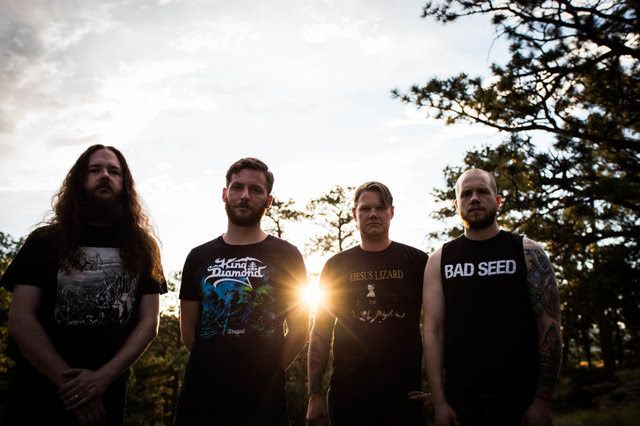 Nuclear Blast Entertainment,‎ via a licensing deal with 20 Buck Spin, are immensely pleased to announce the worldwide (ex. North America) signing of Denver, Colorado based multifarious doomed heavy metal quartet KHEMMIS. Welcome to the family!
KHEMMIS are currently working on new material destined to be their third record, due to be released in 2018 via 20 Buck Spin in North America and via Nuclear Blast Entertainment elsewhere globally.
KHEMMIS commented on the signing:
“We are honored to join the legendary Nuclear Blast roster for the release of our third album. The new songs we’ve been working on build upon the melodicism of »Hunted« while also exploring new, heavier, and more aggressive sonic terrain. We plan to enter the studio in early 2018 with a tentative mid-year release date. Thanks to Monte Conner, everyone at NB, and the listeners and fans who have supported us.”
Formed in 2012 in Denver USA, KHEMMIS have released two albums to date. 2015’s “Absolution” and 2016’s “Hunted” paint a unique portrait; encompassing spiralling progressive doom, fuzz-toned stoner riffs, syrupy sludge and churning classic grooves. They transcend traditional doom forming elegant yet dramatic tracks, conveying their unique sense of melancholy edged with a sense of foreboding.
Debut record “Absolution” earned the four piece outright critical praise from the underground, plus achieving them Decibel’s “Top 40 Albums of the Year” list allowing their impact to slowly start seeping into the mainstream consciousness. »Hunted« broke down those final barriers earning KHEMMIS widespread recognition, ranging from glowing reviews at Metal Sucks, Metal Injection and Pitchfork, to earning them a spot in Rolling Stone’s “20 Best Metal Albums of 2016” list and Decibel’s highly sought after “Album of the Year” accolade. Not many bands out there can boast about being compared to the likes of THIN LIZZY and ZZ TOP, to PARADISE LOST, MY DYING BRIDE and JUDAS PRIEST.
Support World Of Metal
Become a Patron!
World Of Metal Magazine – Agora Grátis/Now Free!
Buy CDs in our store