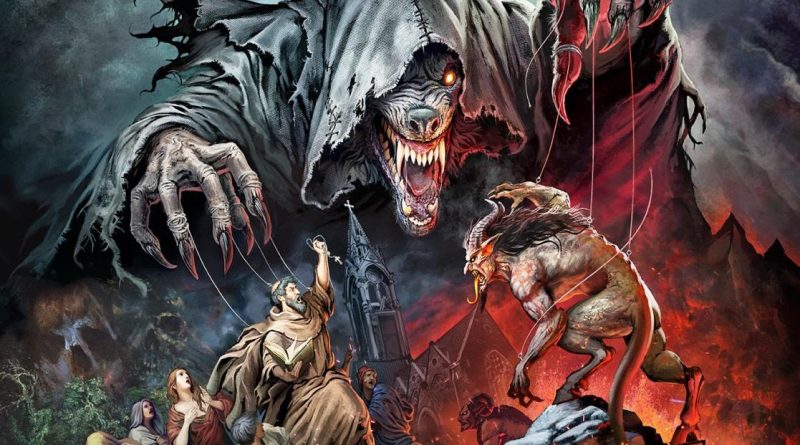 POWERWOLF releases the full album artwork including track listing! After teasing with appetizers in form of song titles and parts of the stunning album artwork, it’s time to see it in full!

The Sacrament Of Sin is full of purest lifeblood and heaviest passion! This new record overwhelms both with sophisticated songwriting and sheer aggression – and proves once more why POWERWOLF are the one and only true high priests of heavy metal!

Matthew Greywolf on the upcoming release:
“We’re proud to finally unveil the album title along with the amazing cover artwork of “THE SACRAMENT OF SIN”. While we are in the final stage of mixing the album at Fascination Street Studios we can’t wait to unleash this monster and celebrate this new chapter together with all of you – expect nothing less but a mass more intense than ever, bringing some new elements to the liturgy while being as wild and wolfish as it could!”

The full track listing of The Sacrament Of Sin offers a dozen metal psalms forged for all eternity:
1. Fire & Forgiv
2. Demons Are A Girl‘s Best Friend
3. Killers With The Cross
4. Incense And Iron
5. Where The Wild Wolves Have Gone
6. Stossgebet
7. Nightside Of Siberia
8. The Sacrament Of Sin
9. Venom Of Venus
10. Nighttime Rebel
11. Fist By Fist (Sacralize Or Strike)
12. Midnight Madonna (Bonus Track – only available at EMP and Napalm Records-Mailorder)

POWERWOLF‘s history of success is a true metal fairytale! With their last three records all hitting the TOP 3 of the German album charts, two of them at NUMBER 1, sold-out headline shows and frenetically celebrated festival gigs all over Europe, POWERWOLF prove: Metal is religion and with their new effort The Sacrament Of Sin the best is yet to come!