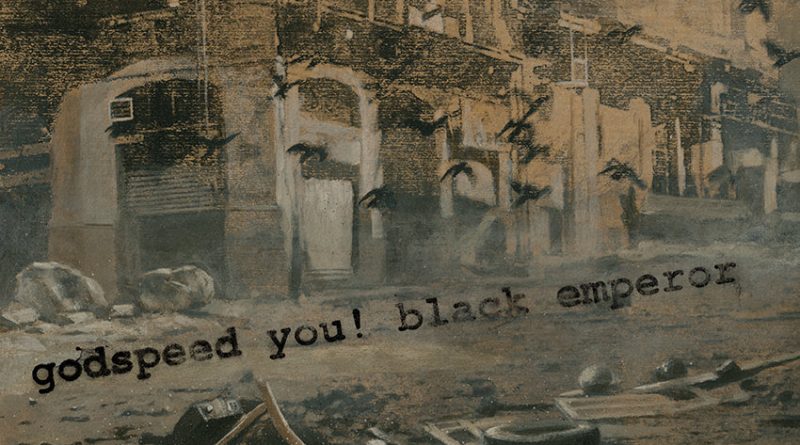 Roadburn Festival is proud to announce the first artists for the 2018 line up, which will take place at the 013 venue, Tilburg, The Netherlands between April 19-22.

Artistic Director, Walter Hoeijmakers commented:
“At Roadburn, we’re always looking to push the envelope when it comes to working with creative and diverse artists; we’ll never settle for toeing the line. These first artists should give you an idea of the direction that Roadburn will be taking in 2018, but as ever, don’t assume you have us sussed – we always have more up our sleeve!”

Godspeed You! Black Emperor have slid smoothly into our collective consciousness, picked apart the very notion of what it means to be a band and teetered on the precipice between serenity and all out chaos. The diversity of their output and their ability to always keep us guessing is a big part of why having them perform two headlining sets at Roadburn feels like a natural fit.

Their varied back catalogue makes for rich pickings, should they choose to cycle back through previous representations of the band; should they opt to look forward, into the unknown, we await with baited breath to see what is delivered during their two separate performances. Their live shows are renowned for being all-encompassing, immersive experiences, where even the visual aspect is overwhelming, usually including film projection performances that gain as much impact to the overall event as the music itself, the two interwoven as one. No doubt their Roadburn performances will be ones for the history books.

Godspeed You! Black Emperor will perform at the 013 venue on Saturday, 21 April and Sunday, 22 April. Read more here.

When Converge performed two groundbreaking sets at Roadburn 2016, followed by Jacob’s Wear Your Wounds set at Roadburn 2017, we knew we’d found a kindred spirit. Known not only for his audio output, but also for his visual art and founding role in Deathwish Inc, Bannon’s influence is broad and his Roadburn wish list is very much in tune with our own visions.

Jacob commented:
“It is an honor to be working as the curator for Roadburn Festival 2018. The festival is unlike any other, showcasing the most forward thinking artists and musicians of the heavy music world. As this year’s curator I will reach across its sub-genres to bring together an array of incredible bands/musicians, expanding the reach of the festival while celebrating the world of extreme music that we all love.”

Jacob Bannon will curate the main stage at the 013 venue on Friday, 20 April, and Het Patronaat on Saturday, 21 April. Read more here.

The aforementioned Converge sets in 2016 were something truly special to behold. The Blood Moon set – which featured Chelsea Wolfe, Steve Von Till and Stephen Brodsky – will go down in Roadburn history, and the one-off Jane Doe set has already been committed to record such was the impact of the performance.

The relationship between Converge and Roadburn is far from over, and we’re thrilled that these four incredible musicians will return to the Roadburn stage for two essential, full album sets in 2018.

Jacob Bannon elaborates on the performances:
“In 2016, we played our Jane Doe album in its entirety at Roadburn Festival. For our 2018 return, we will perform our album You Fail Me in its entirety. Originally released in 2004, this album marked a turning point for our band internally and in many ways it is considered the beginning of the modern era of our band. This performance will be a one time only event, exclusive to Roadburn.”

“It took our band nearly five years to cut and shape our most recent album The Dusk In Us. Scheduled for release on November 3 through Epitaph and Deathwish, it is a very emotional album for the band. All four of us went through a lot of trials and tribulations in those years and it is reflected in those songs, connecting with our lives ways hard to put into words. It will be an honor to play this material in its entirety for the Roadburn audience. We hope it will be as special for you as it will be for us.”

Converge will play The Dusk In Us on Thursday, 19 April, and You Fail Me on Friday, 20 April at the 013 venue, Tilburg, The Netherlands. Read more here.

This new collaborative musical piece is designed by former Roadburn curators, Ivar Bjørnson and Einar Selvik, combining indigenous and contemporary music with Norse and Norwegian poetry, accompanied by instruments from the Stone Age through to the present day. It’s set to be a monumental follow up to Skuggjá’s international premiere at Roadburn 2015.

A series of concerts named Nordvegen (‘the northern road’ – an ancient shipping route connecting Norway to the rest of the world for some 3000 years), was performed in four harbors along the west coast of Norway in late May and early June of 2017. The audience was taken on a spectacular journey along this route in a musical declaration of love to Norwegian coastal culture and Norse history. The concerts were inspired by local history in each of these places. The Nordvegen concerts created an acoustic and intimate basis for the grandiose commissioned work, Hugsjá, which received its world premiere in Bergen concert hall Grieghallen on May 31. Originally commissioned by and performed at Bergen International Festival, the piece will now sail southwards to Roadburn 2018.

Einar & Ivar will also be taking part in a “guided tour” of Hugsjá; explaining more about the origins of the composition and taking questions from the audience.

Hugsjá will be performed on Saturday, 21 April at the 013 venue. The guided tour will take place on Friday, 20 April at 013 venue. Read more here.

Although not yet released, the upcoming 83-minute album from Bell Witch, titled Mirror Reaper, is already making waves on Planet Roadburn. Recreating the record in all it’s crushingly exquisite glory requires the input of Erik Moggridge (Aerial Ruin), who we are delighted to welcome to Roadburn to complete the performance of Mirror Reaper.

As Moggridge has appeared on all Bell Witch releases to date in some capacity,  we are thrilled that Bell Witch have agreed to perform a second set of music with him. Expect his fragile yet evocative vocal style to lend an even more ghastly and ethereal quality to Bell Witch’s already otherworldly sound.

Bell Witch will perform on Saturday 21 April at the 013 venue and Sunday, 22 April  at Het Patronaat. Read more here.

For the past decade, Austin Lunn has created some of the most evocative and personal American black metal, in relative isolation. With only a few shows under their belt, the band has astounded and delighted with each appearance in their short live tenure. To make this Roadburn appearance even more special, we’ll be treated to two separate sets during the festival.

Panopticon will perform selected songs from a new double album entitled The Scars of Man on the Once Nameless Wilderness during one set, and a career spanning selection  of tracks will be performed  during the other.  From the rawer, vicious material compiled on the early …On the Subject of Mortality collection to the groundbreaking bluegrass-heavy Kentucky to the shimmering melody and majesty of recent releases Roads to the North and Autumn Eternal – this is a rare treat and we can’t wait to feel the soot and smoke in our hearts and heads as Panopticon levels the venue.

Panopticon will perform at Het Patronaat on Friday, 20 April, and the 013 venue on Saturday, 21 April. Read more here.

When word got out that master saxophonist Colin Stetson had put a new metal band together called Ex Eye, excitement levels were high. The relentlessness of the band’s assault, the enormity of its scope and the unbound energy they exhale means that they make music that might skip your brain altogether and activate your nervous extremities all by itself. Just seeing a legendary figure like Colin on stage playing metal would be satisfying enough; that he’s recruited people like Liturgy’s Greg Fox on drums, bassist Shahzad Ismaily (who’s played with the mighty Secret Chiefs 3) and guitarist/composer Toby Summerfield to complete this stellar line-up is just icing on the cake.

The Heads have a special place in the history of Roadburn. Not just because the UK psych lords have made multiple visits over the years – 2006, 2008, artists-in-residence in 2015 – but for the transformative effect their sets have had on the crowds, the vibe, the very fest itself. Nobody takes Roadburn to where The Heads take Roadburn.

“Roadburn is the best festival The Heads have played,” enthuses guitarist/vocalist Simon Price. “The vibes, the crowds, the bands, the organisation; it’s the whole package. Roadburn always delivers. Playing on stage or just wandering around, it makes me grin. It is The Heads’ spiritual home. We can’t wait to bring it on again in 2018.”

The Heads will perform at the 013 venue on Saturday, 21 April. Read more here.

The brainchild of French composer and multi-instrumentist Gautier Serre, IGORRR  is genuinely disorienting. One of the most excitingly unpredictable acts in any genre you might want to try and shove them into, its wild character and fearless will to experiment are the staples of the sort of creativity we fiercely stand behind at Roadburn. What choice did we have but to bring this wrecking ball of delirious creativity to Roadburn and see and hear for ourselves how it all translates to the stage with a full band playing it?

Igorrr will perform on Friday, 20 April at the 013 venue.  Read more here.

Aerial Ruin – AKA Erik Moggridge – may be best known to many on the basis of his frequent appearances on albums by the mighty Bell Witch, but his own project displays a remarkable sense of texture and delicacy that is equal in its melancholy yet entirely independent. Aerial Ruin’s recently released Nameless Sun beautifully follows the tradition set forth on its predecessor Ash of Your Cares in offering up eerie acoustic confessionals that can raise the hairs on the back of your neck. Moggridge plays guitar with the precision of a spider slowly building its web; everything falls into place delicately yet with a brilliant and focused grace.

Aerial Ruin will perform on Saturday, 21 April at the 013 venue. Read more here.

Led by Pablo C. Ursusson, a musician and lyricist who has also done work in painting and sculpture, Sangre de Muerdago is deeply connected to the very earth of their Galicia homeland. With a background in Spanish punk and other kinds of countercultural movements, the band is the vehicle through which these musicians leave the harshness and aggression aside and channel the folk tales of Galicia through traditional instruments and gentle, haunting, ancient-sounding singing.

Having made a dent in the Roadburn psyche earlier this year when he took part in the Full Bleed art exhibition at the 2017 edition of the festival, Richey Beckett will be returning next year. This time he will be our official poster artist, creating the artwork that will adorn our posters and merchandise for the 2018 edition.

Based in South Wales, Beckett is a highly talented artist with his roots firmly planted in the natural world, where he draws much of his inspiration from.

Beckett comments:
“Being invited to create visual artwork for this year’s Roadburn is a tremendous honour. Roadburn isn’t just another heavy music festival, it’s something that over the years has evolved into a pilgrimage of a worldwide community; a celebration of music, the creative spirit and camaraderie.”

.  Ahead of the tickets going onsale, we will be able to confirm more details of the line up, plus camping options in Tilburg during the festival.