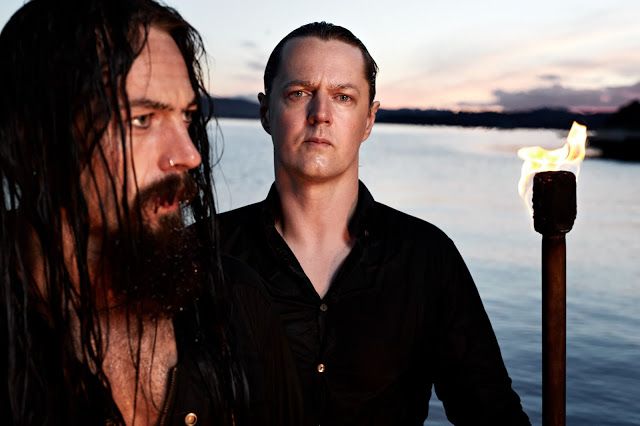 Black metal legends SATYRICON have revealed their highly anticipated ninth studio album, ‘Deep calleth upon Deep’ is set for release on 22nd September on Napalm Records.
Now the iconic duo fronted by visionary Satyr has unveiled a lyric video for the album title track and first single from the band’s upcoming masterpiece. Satyr informs us:
“It was not easy to chose a song to represent this album as they are all so different. I consider them all to be a group of individuals with strong and unique personalities and together they make the album “Deep calleth upon Deep”.
The title track is the only song we’ve done with baritone and regular guitar all the way through the song. I felt it was needed for the tonal depth I was looking for and to enhance the swing of the groove in the heavier parts. It also has mellotron, cello, violin and backing vocals by classical singer Håkon Kornstad where the cello supports the baritone guitar and the mellotron, violin and the backing vocals provide air and width to the sound. Consider it a journey, play it loud, close your eyes and head into the forest. That’s what I do.“
The single ‘Deep calleth upon Deep’ is now available for digital download and streaming on: http://radi.al/DeepCallethUponDeep
You can also watch SATYRICON‘s brand new lyric video below Recorded in Oslo, Norway and Vancouver, Canada, during early 2017 and mixed together with revered studio guru Mike Fraser (who previously worked on SATYRICON’s 2006 album, ‘Now, Diabolical’), ‘Deep calleth upon Deep’ is not just a new collection of songs from one of extreme music’s most enduring and reliable bands: this is a wholesale reinvention and a brand new era in SATYRICON history! A profound statement about the essence of SATYRICON’s music and the eternal value of art itself.
SATYRICON have always excelled as a live band, their evocative performances increasingly becoming special events as their frequency is dialled back to accommodate the Oslo band’s new ‘modus operandi
Support World Of Metal
Become a Patron!
World Of Metal Magazine – Agora Grátis/Now Free!
Buy CDs in our store