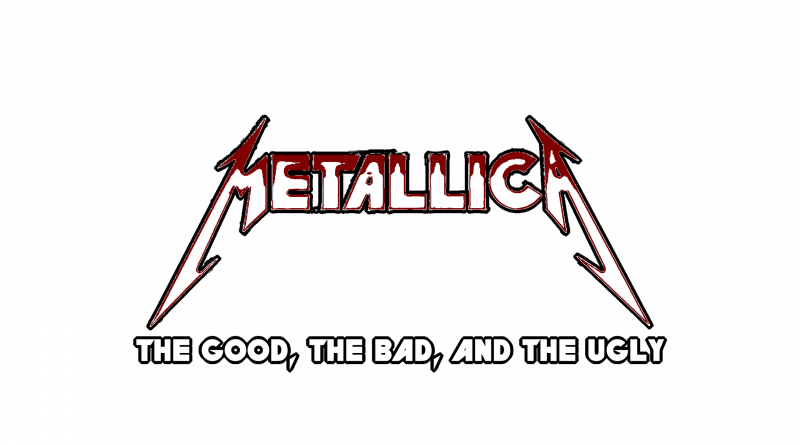 This is the first of a series of articles where we will dissect the meaningful records in the career of several bands, being the first one, Metallica.  The rules are simple, choose the top 3 records (The Good), choose one record that could be better (The Bad) and choose that one that’s beyond any redemption (The Ugly), and justify your choices. Are we clear? Let’s go right into it.

This album doesn’t have a weak track in it. Ok, that’s debatable, everything is debatable but even if you don’t like it, you have to agree that this is the perfect equilibrium between the furious thrash that the band had been delivering so far, with the heavier side – “The Thing That Should Not Be” is a fucking juggernaut and influenced all the groove that came after, as also is “Leper Messiah” – and, of course, the melodic and progressive side that is masterfully done in “Master Of Puppets”, “Orion” and even “Disposable Heroes”. There’s not a weak song in it and it’ll always be a reference to the power and brilliance achieved by the band.

In this one, we’ve got the band taking a huge leap after their debut album, “Kill’Em All”. They took their chances in various occasions and showed the world they were not interested in making the first album twice. From the acoustic and erudite introduction in “Fight Fire With Fire” – a song that is one of the most furious ones they’d ever written –  to the progressive approach on songs like the title track and instrumentally closer, “The Call Of Ktulu” and (specially) the power ballad, their first one, “Fade To Black”, one of the best songs they’ve ever written. It’s not a perfect album only due to “Escape”, a song that even Hetfield loathes and, if I’m not mistaken, hasn’t ever been played live.

…And Justice For All

Out of the four horsemen’s classic albums trilogy, this is my favourite despite it also being the one I consider the less strong. How can that be? Easy. First of all, the production: the legendary “no bass thing”: the domination of the sound by drums and guitar leaving it with the bass at the low end. Secondly, the composition is far more progressive – that‘s the reason why it’s my favourite Metallica album – but sometimes it feels like certain songs are in the borderline of boredom, like the title track and songs as “Eye Of The Beholder” and “The Frayed Ends Of Sanity”. It was such a progfest that the band had the need to do simpler things that, let’s face it, had already shown its faces here on groovy tunes such as “Harvester Of Sorrow” and “Shortest Straw”. Nevertheless and despite all its issues, it’s still ‘Tallica at their finest hour.

I have to confess, I like this album, I grew up with it. It was the first album I bought when it was released – I got into the band after the black album and by this time, I was ready for everything the band had to offer. Well … even this. It sure doesn’t have the power the last one had but this wasn’t anything unexpected. It has that southern/country feel that “Unforgiven” had and it also showed the band going even further on getting songs simpler. Despite being one of the best on the lyric department (not that we get to read them in full in the booklet, that feels more like a fashion catalog), it just doesn’t have those beloved trademarks that we all love in the band, including Kirk Hammett’s solos, that really have a small part on “Load”.

Where can we start? From the horrible artwork (a shout out to all the nu-metal trend) to the production (not going to mention Lars snare drum, not going to mention Lars snare drum), without leaving out the fact that all the songs sound like demos that still need to be finished – even the lyrics that always stitched the band’s music together when the instrumental part was not memorable, sound childish and amateur. The endless repetitions within the songs, the lack of solos (again) and that feeling that the band was desperate to release anything to get back on track, are also among the reasons this album is so bad. Indeed, this one is the album that both saved Metallica from oblivion and also permitted the band to heal from its self-inflicted wounds and be rebourn.
These are our choices, what is yours?