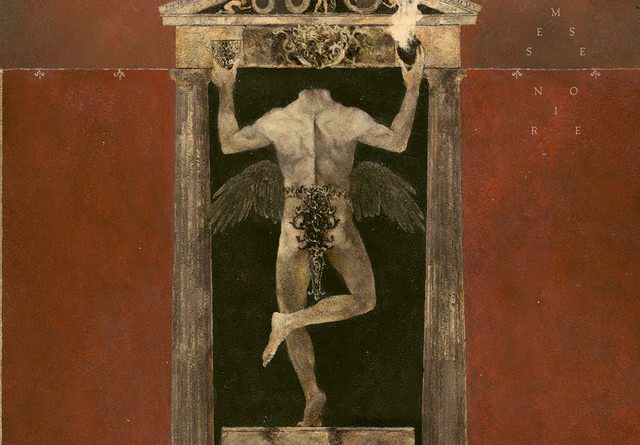 Watch the official teaser video over at the BEHEMOTH‘s  Facebook page.

The band also released the live cut of the performance of crushing ‘Blow Your Trumpets Gabriel’ here:

»Messe Noire« includes the band’s victorious shows in Warsaw, Poland on October 8, 2016 and Brutal Assault 2016 as well as »The Satanist« cinematic archive featuring all official videos associated with the band’s globally successful record of the same name.

The release will be made available as limited earbook edition including the DVD, the Blu-ray and the CD, as well as DVD/CD resp. Blu-Ray/CD digibooks. The vinyl versions contain the Warsaw gig and will be available on silver, gold (Nuclear Blast Mailorder exclusive) and black vinyl.

See all formats below and pre-order now at this location: http://geni.us/BehemothMesseNoire

Relapse Records is proud to announce the signing of Pennsylvania-based death metal legion OUTER HEAVEN. Formed in 2013 from the backwoods of PA, OUTER HEAVEN immediately left a pulverizing imprint on the East Coast death metal scene with their crushing live performances, old-school ethos and string of releases including their 2013 Self-Titled demo, debut EP Diabolus Vobiscum (2015) and a 4-way split featuring label-mates Gatecreeper plus Homewrecker and Scorched (2016).

OUTER HEAVEN will enter the studio in the coming weeks to record their full-length debut at Developing Nations Recording Studio in Baltimore, MD with Kevin Bernsten (Full of Hell, Integrity, Magrudergrind). The album is planned for a late 2018 release via Relapse.

The band commented on the signing and new material:

“We could not be more excited about becoming part of the beast that is Relapse Records. To be amongst so many bands that inspired us, as well as so many friends, is something truly killer. Our forthcoming LP promises to be the most devastating material we have conjured to date. We have sunken days, months, years, and LAVA into these songs and we think it will undoubtedly show.”

A list of currently confirmed OUTER HEAVEN tour dates, including appearances at Obnoxious Noise Fest alongside Pig Destroyer and Blood of the Wolf Fest, is available below. The band has previously performed with Deicide, Belphegor, Cryptopsy, Immolation, Gorguts, Nails, Hate Eternal,  Defeated Sanity, Gatecreeper, Full of Hell, Internal Bleeding and numerous others.

Austin (TX) – Dynamic Texas Death Metallers VEX have released the official video for “Nowhere Near,” a track from The Machine Shop Sessions, the band’s new live-in-studio EP. Check out the video below:

The Machine Shop Sessions is out today! Visit the following link to purchase your copy:
vextx.bandcamp.com/album/the-machine-shop-sessions
VEX guitarist Ciaran McCloskey had this to say about The Machine Shop Sessions:
“This recording acts as a sort of career retrospective, in which we chose one song from every album that we’ve historically had trouble pulling off live. We thought the availability of such a glorious studio would be a great opportunity to grind each song out until we had versions that we could live with. Each track was performed live in the studio with no editing or additional tracking, and plenty of warts to be found. The overall experience was excruciating but ultimately very encouraging.”
Track List:
1. Erosion
2. The Circular Ruins
3. No Such Thing
4. Nowhere Near