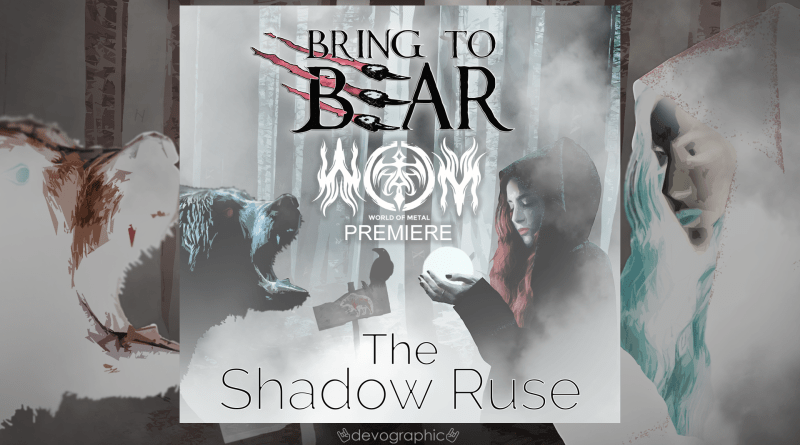 Bring to Bear is a symphonic folk metal band  from UK formed in May 2020 by long-time friends and bandmates Ian Tarboton and Hristo Nikolov, the determined duo wasted no time in preparing their first material and expanding the Bring to Bear clan. By January 2021 the current lineup was clinched, adding Simon Jones on drums, Nikiforos Rotas on guitar and Izabela Smyt on lead vocals. In May 2021 the indomitable quintet entered the studio to record their debut EP (set for release in 2021), with the first single and video being ‘The Shadow Ruse” that World Of Metal presents in an exclusive premiere below:

The lyrics, written by Ian Tarboton (accordion, keyboard & growls), ponder the relationship between ‘light’ and ‘dark’. Ian shares that “in life, we often categorise things into good and bad, and colour them light and dark respectively, as we go through ups and downs. But, what one person perceives as good is often perceived as bad by another, and vice versa. So, what exactly does that mean? Who can say other than good and bad are merely perceptions? Where there is light, there are also shadows, yet light looks brighter when it shines in the dark. Ultimately, it is all games in the mind and we either see through the game or we become the game. We evolve and grow as we learn to see through the game and find the balance. The music for this song was mostly written by our guitarist Hristo Nikolov, and was originally intended to be more punk in style. But, it was soon obvious that while it had all the energy of punk, it had a darker undertone that just had to be in a metal song. So, it became the first song worked on by Hristo and I and it laid the foundation of Bring to Bear’s style.”