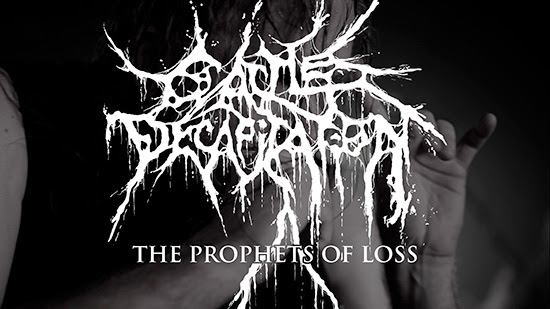 This past summer, CATTLE DECAPITATION embarked on a European trek, during which director Paul McGuire / Obscenery Films (obsceneryfilms.com) travelled with the band and captured behind-the-scenes and live footage. To watch the music video for ‘The Prophets of Loss’, taken from 2015’s ‘The Anthropocene Extinction‘, watch it below:

Puppy have created a video for new single, ‘Demons’. Directed and Produced by Puppy drummer Billy Howard Price, the video delves into their recent exploration of ‘Ascension & Transcendence’…

“The song is about learning to live with and accept your demons, and how they can even have a positive impact on your life. For the video we wanted to create something inspired by various cults, quasi-religions & pseudo-sciences that literally sell the notion that they can free you from unhappiness. Which is of course a lie as true happiness can only come from buying the music & merchandise of Puppy.”

Watch the video for ‘Demons’ below:

Meanwhile, Puppy have been in the studio working on their debut album with producer Tom Dalgety (Ghost, Royal Blood, Killing Joke); new song, ‘Demons’ is the very first taste of new music from that forthcoming record. A release date for the album will be revealed in due course.

Additionally, Puppy have reissued their reworked EP, ‘Vol II’, on CD & vinyl via Spinefarm Records. This new six-track version has been remastered and expanded, with video track ‘Beast’ now featured, and pressed onto ‘crystal clear’ vinyl with extra artwork elements added. One in every 20 of the vinyl versions contains a surprise treat from the band; these include polaroids, hand-written notes and drawings. Purchase your copy here.

On the live front, Puppy are now on tour as main support to Kvelertak across 4 UK dates. These gigs, as well as details of Puppy’s additional headline shows plus three in support of Raging Speedhorn..

The Swedish melodic metal band METALITE will release their debut album “Heroes In Time” on October 27th via Inner Wound Recordings. “Purpose of Life”, the third single from the album can now be streamed below.

Stream “Purpose of Life” below:

“Heroes In Time” is an impressive debut album filled with melodic and memorable songs, crowned with the strong and emotional vocals by vocalist Emma Bensing as well as a powerful production by Jacob Hansen [Volbeat, Amaranthe, Evergrey]. The album should be perfect for fans of bands like Beyond The Black, Dynazty and Amaranthe!