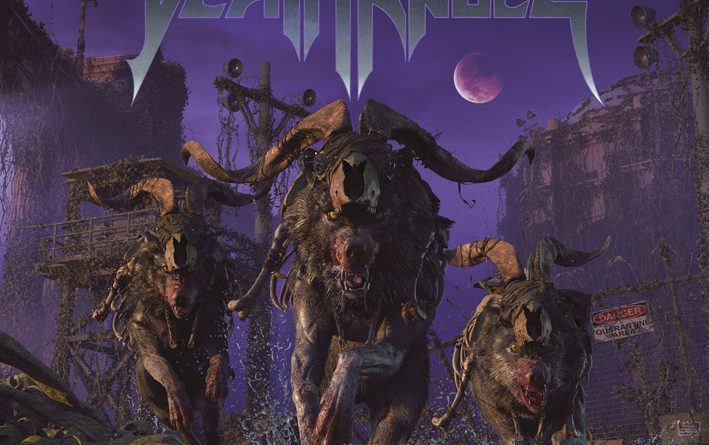 California thrash metal legends DEATH ANGEL have unleashed a snarling new song today called “The Pack”from the band’s long-awaited 9th full-length album, Humanicide, that’s due out May 31st from Nuclear Blast Records. Watch the lyric video for the track below:

“’The Pack’ is inspired by and dedicated to our fans! When I wrote this song, we had just come home from tour and I was still feeling the rush of performing at open air festivals. The energy exchange between us on stage and the mass of metal heads in the crowd is unlike any other. I wanted to capture it in a song about unity, like our song “Kill As One.”

Our fan club is called “The Pack,” our fans get it! But it’s not only for them, it also branches out to represent our families, friends, team, crew… and all metal heads!  We feel honored to belong to this worldwide “pack.” This song requires crowd participation, we are SO looking forward to playing it live!” –  Rob Cavestany (lead guitar/backing vocals)

German Metal wizard AXEL RUDI PELL releases a new digital single and video for the song “Only The Strong Will Survive (live)” today. The song is taken from the forthcoming live album “XXX Anniversary Live”.
Axel Rudi Pell says: „Only The Strong Will Survive“ was recorded live in Langen, Germany last year during our „Knights Call” Tour with the quiet guitar opening part coming from our show in Memmingen. Originally from the “Kings & Queens” album, we played that track live for the very first time last year and we really had fun doing that!”
You can watch the video here:

Polish extreme metal veterans VADER are set to release their new EP titled “Thy Messenger” on May 31st this year. Today, the band have revealed the lyric video for new track and digital single “Grand Deceiver”.

Check it out here:

The band states:
„We are so excited to give you new Vader song from our fresh record! „GRAND DECEIVER” is the opening track on „Thy Messenger” EP and perfect explanation of what you all may expect with the upcoming releases. Sharp as razor and brutal as Hell track is just an appetizer before the new Vader album to come .
Chris of Nuclear Blast created this brilliant lyric-video clip , which you can watch while waiting for „Thy Messenger”. Sit comfortably, play it LOUD and…ENJOY!!!”