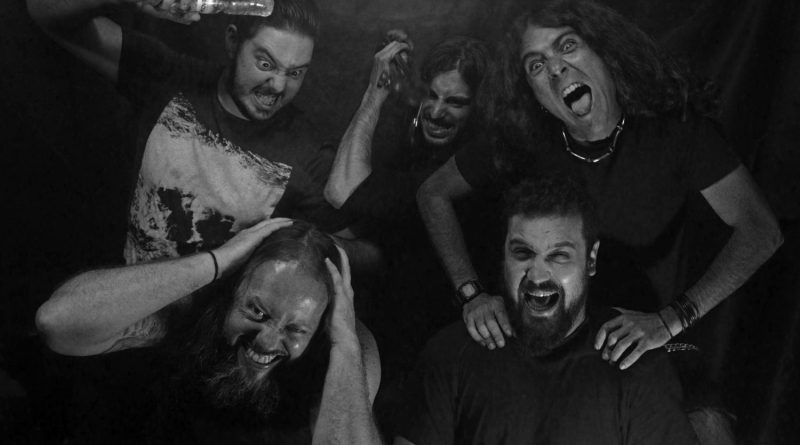 Portuguese metallers Destroyers of All partner again with Mosher Records for the release of their new album “The Vile Manifesto”, coming out February 2nd, 2019.

To celebrate the announcement of the new album, the band has premiered the lyric video “False Idols” as the first display of new music. “The song’s about the atrocities operated by a military unit that performed pseudo science in order to prove a point – and failed”, says the vocalist João Mateus, who clearly states “the lyric is a heartfelt tribute to all the victims of war.”

Charged with vicious riffs, voracious vocals and ear blasting drums, this record marks a new chapter for the band as it pushes the boundaries of heaviness of their sound more than ever before. As a result, this album is more violent and straight-to-the-point than the previous ones, yet without losing the creative identity that marks the band’s music since its inception.

The album cover was hand drawn by legendary artist Mark Riddick, who has previously worked with bands such as Arch Enemy, Exodus, Morbid Angel, Mortician, The Black Dahlia Murder, Suffocation and many others.

The new album can be pre-ordered at www.destroyersofall.com. Several bundles are available, including different combinations of the album, merchandise and tickets for the presentation show.

“The Vile Manifesto” (2019) is the third release of the band after the debut EP “Into the Fire” (2013) and the LP “Bleak Fragments” (2016), both critically acclaimed by specialized media. The band once again chose to record the new album at the Golden Jack Studios in Portugal, also having it mixed and mastered by João Dourado.

Raise your whiskey glasses, because the day has finally come: Today, the infernal hard rockersCHROME DIVISION release their fifth and final studio album »One Last Ride«, which celebrates the band’s fifteenth anniversary with heavy riffs, catchy melodies and roaring engines.

For this last trip, the Norwegians led by DIMMU BORGIR‘s Shagrath once again got their original singer Eddie Guz on board and with ‘I’m On Fire Tonight’, CHROME DIVISION present another single from their new album. Watch the lyric video, here:

Start your engines and order the different formats of the new album here:
http://nuclearblast.com/chromedivision-onelastride

“Filthy Bastard Culture”, the new album of the thrash titans WARPATH, will officially hit the stores next Friday! They have now released a lyric video for the brand new song “Into The Dark”, which is available here »

“Filthy Bastard Culture” was mixed and mastered by Eike O. Freese at the Chameleon Studios, Chris Hergt took care of the album artwork. You can get the album here » https://lnk.to/warpath_fbc – It will be available as CD Digipak, limited vinyl LP, stream and download. The video for the second digital single “St. Nihil” is scheduled to be released next week.