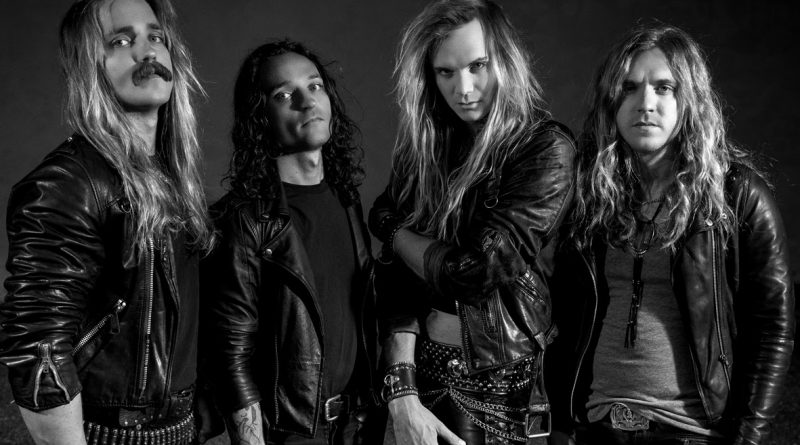 Swedish metallers ENFORCER recently announced the release of their highly anticipated new studio album»Zenith«, their first record in 4 years. Today the quartet has launched a music video in support of the stomping first single, ‘Die For The Devil’, to give their fans a first taster of their forthcoming offering. Watch it now below:

Guitarist/vocalist Olof Wikstrand comments, “‘Die For The Devil is the opening track of »Zenith«. We wanted a huge intro track where the greatness lies in the simplicity and where we can integrate the audience into a song at an early stage. The video is once again directed by our childhood friend Gustav Ohman Spjuth who has been directing pretty much all other videos we have done.”

War«, today via Nuclear Blast. In celebration of the momentous event, the band offer fans a music video for “Welcome to the Garden State“. Check out the infectious song and video that pays homage to Jersey here:

Bobby Blitz comments, “Not before in our video history have we presented something so artistically-seedy. This due to the brilliant yet twisted, vision of the editing room genius, behind the camera magic and damn tenacity of Mr. Tommy Jones; a good standing card carrying Jersey Boy, who did the band and the state proud. We had verbalized the story line to Tommy, who fully got it and we all created something to be proud of. So when you visit the Garden State, see or hear something that is different for you and you think; ‘hmmmm that’s not the way we do it at home.’ Remember this, you’re not at home anymore… are you?”

While on their current UK/Europe tour, Buckcherry filmed the official video for their debut single, “Bent”, off of their forthcoming album, Warpaint, out March 8th.

Director Phil Wallis jumped on the bus when Buckcherry arrived at Heathrow airport and filmed the band nonstop in Manchester, Bristol, and London.  The video captures the band on and off stage in those three cities. Watch the music video below:

Warpaint is currently available for preorder physically and digitally. Anyone ordering digitally will receive “Bent”, “Head like a Hole”, and the title track “Warpaint” as instant grat tracks. Pre-orders are available HERE.