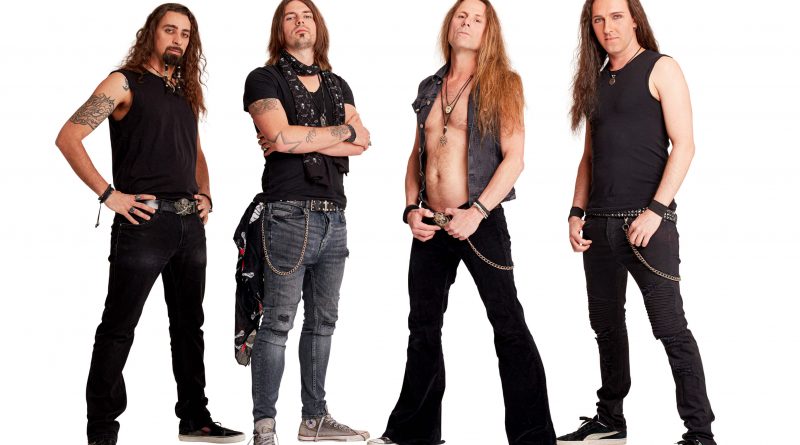 German melodic metal band FREEDOM CALL releases a new single and video for the song “M.E.T.A.L.” today. The song is taken from the forthcoming studio album with the same name “M.E.T.A.L.”.

The new album “M.E.T.A.L.” will be released August 23rd, 2019  through SPV/Steamhammer as a CD, digipak version, 2LP gatefold version, download and stream:https://FreedomCall.lnk.to/METAL

Director Achilleas Gatsopoulos states:
” It was my honor to be entrusted by such a historic band to create a fresh visual aesthetic for their new album.  It was important for me to strip things down and start with the basic raw and powerful visual elements that derive from their trademark logo:
Sharp angular shapes, high contrast and a monochromatic color palette of  red, black and white.
Inspired by Dario Argento’s horror masterpiece SUSPIRIA as well as by the existential portraits of Francis Bacon and mythology, we create a dark tableaus of archetypal forms of betrayal:
Two-faced/deceit, Back-stabbing, Infidelity, Garden of Eden,  Wartime Snitch and we close with none other than the iconic Kiss of Judas.
It was an immense pleasure to work with the guys and I am really looking forward to next time.
‘Til then, enjoy the audiovisual onslaught that is BETRAYAL.”

Frontman Schmier adds:
“This is maybe my fave song from the new album cause of it´s classic thrash feel and the very catchy chorus. Randy is all guns blazing here and Mike & Damir have an awesome solo battle!
“We all have our experience with BETRAYAL and wanted an emotional, atmospheric and different video!”

The new opus of Swedish adventure metallers TWILIGHT FORCE, »Dawn Of The Dragonstar,« will see the light of day in four weeks’ time (August 16, 2019) through Nuclear Blast. Today, the fellowship has unveiled another epic tale off the much anticipated album in the form of animated pictures, which were produced by watchful director Stefan Altzar and captured for all eternity by diligent cameraman Tommy Eriksson. Enjoy the magic melodies of the title track, ‘Dawn Of The Dragonstar,’ below:

Keyboard wizard Blackwald proclaims, “Knights and apprentices! We are delighted and excited to finally present to you the title track from our third creation – ‘Dawn Of The Dragonstar’! This hymn tells the olden tale of a mighty and ancient dragon, whose final fate is to ascend to the firmaments and become a star of guiding light. The splendour of his gleaming soul brings honour, courage and strength to all humans, elves, and dwarves.

“The video for this song portrays TWILIGHT FORCE on their journey to help fulfil the prophecy of the Dragonstar. By using the blinding swiftness of his nimble fingers, Lynd, empowered by powerful enchantments, imbues the petrified Dragonking with renewed lifeforce. However, the incantations required to enchant Lynd turn out to be volatile, and Born’s potent decoctions come in handy when Blackwald’s spellcasting manifests itself in a somewhat…unplanned manner (shapeshifting is indeed a handy school of magic, but it is better utilised for quests requiring great stealth rather than for awakening dragons). We hope you enjoy this adventure together with us, and may the power of the Dragon guide you all!”

The captivating and beautiful artwork for the song, which illustrates the mighty dragon’s ascension towards the empyrean void, was conjured up by none other than Martin Hanford, the creator of TWILIGHT FORCE‘s very first album cover.