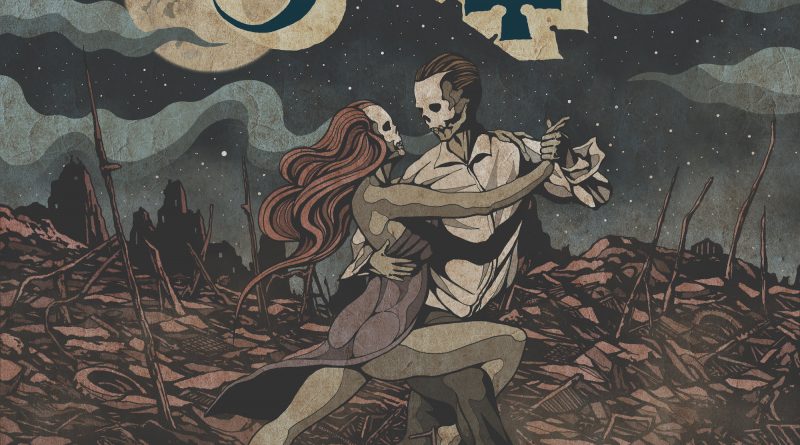 With 15-million streams worldwide, “Dance Macabre” is already one of the most popular tracks from Prequelle, the new album from Grammy Award-winning Swedish rock band Ghost. Now, “Dance Macabre” is reborn with a provocative remix by the eclectic and mysterious French synthwave band Carpenter Brut. You can check out the track and its companion animated visual below:

“I’ve been a big fan of Ghost since their beginning,” said Carpenter Brut, “and when I had the opportunity to open for the band in 2016, I was super excited. Last April, I received an email from Tobias himself asking if I would remix ‘Dance Macabre,’ and of course I accepted. I wanted to bring a funky and disco touch, not just confine myself to the pure synthwave style that would have been expected, but to make this remix a disco rock song and bring out the pop side of the band that is always underlying in their music.”

The Carpenter Brut remix crosses Ghost into the realm of dance music by injecting an infectious energy into a song that stays true to the album’s overall theme of The Black Plague that took place in 14th century Europe. The Plague spread rapidly, killing people within days of being infected.  At the time, local inns, taverns and brothels thrived as the populace knew there was no tomorrow, so they danced and partied, celebrating the End of Days.

Tobias Forge, Ghost’s mastermind, is a long-time Carpenter Brut fan, having invited them to fill the support spot on Ghost’s Fall 2016 tour. Forge always felt that “Dance Macabre” was a song he wanted to do a remix of and Carpenter Brut was his first choice.

The “Dance Macabre” Carpenter Brut remix comes on the heels of Ghost’s record-setting run at U.S. Rock Radio where “Rats,” the lead single from Prequelle, has just completed its ninth consecutive week at Number One, the longest-running track to top that chart this year.

The world is dancing a grim fandango right on the edge of the abyss, one foot dangling over the edge: We’re all damned, most of us just don’t know it yet. But fear not, as rock rebels I’LL BE DAMNED are here to prevent you with their attitude-driven blend of pure Rock ‘n Roll, Heavy Metal Groove and a heavy dose of the Blues Hard Rock! Only a few days left until Denmark’s hottest Rock sensation since Volbeat will release their second full-length album ‘Road To Disorder’ on August 31th 2018 with Drakkar Entertainment, now the band unleashed a stunning new video for the track ‘Just Ain’t Right’! Watch the brand new clip, animated by Simon Eskildgen, right below:

Says the charismatic vocalist Stig Gamborg: “Just Ain’t Right is a eulogy to God and the people who created him. Remember Satan is your friend and that in the end he will win!”

Formed in 2010, I’LL BE DAMNED already left their stamp in nowadays Rock scene. It’s no wonder that the band already shared the stages with bands alike Metallica, D-A-D, Airbourne or Steel Panther! ‘Road To Disorder’ is a huge rollercoaster and bears every sign of a triumphant second album: Balls, power, anthems and a swagger with vengeance. Metal, Punk, Stoner, Rock’n’Roll and the Blues have been mangled and reassembled into something big and uncannily anthemic. Dark issues, clad in explosive tunes: The direction of ‘Road To Disorder’ is similar to that taken on last years’ self-titled debut sensation. Yet, nobody in this band is burying his head in the sand – even though the one or the other track off the new record are decidedly more doomy and gloomy. “Road To Disorder has something for the whole family” the band comments. “Punk, Sludge, Blues, Hard Rock, Heavy, Orchestral and all things in between. It is our salute to everything hard and heavy. We hope you will enjoy it as much as we have enjoyed creating it!“

Coming out on August 31th with Drakkar Entertainment, pre-orders are available HERE!

Drop everything and enjoy DARK MILLENNIUM’s new single “In Equilibrium” in its entirety below:

It’s the second single off the upcoming album “Where Oceans Collide”, which will be released this Friday on Massacre Records.

On “Where Oceans Collide”, mixed and mastered by Hilton Theissen at Wide Noise Studio, DARK MILLENNIUM continues its unpredictable evolution. The distinctive guitar work by Hilton and Michael as well as the unique voice of Christian are still dominant and highly recognizable even in a new and experimental setting. Get the album as a CD or LP here » https://massacre.lnk.to/darkmillennium_woc