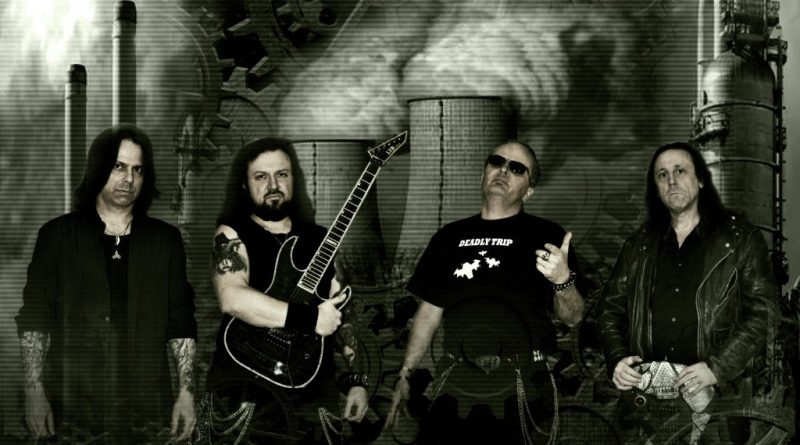 HEADLESS CROWN recently announced their new album “Century Of Decay”, which is scheduled to be released on March 30, 2018 via Massacre Records. The band now posted the official video for the album’s title track “Century Of Decay” – watch it here:

The new album, “Century Of Decay”, is a dark concept album, which is set in a near dystopian future. The story follows a nameless worker who tries to escape his meaningless life through his dreams.

Serge Morattel is responsible for the album’s mix and mastering. HEADLESS CROWN’s guitarist Manu Froelicher has created the cover artwork. The narration is a spanish translation of a “Náhuatl” chant called “ICNOCUICATL” (Nostalgia), written by the contemporary mexican poet and writer “Natalio Hernández”. Music by Adrian Benegas. Contemporary “Náhuatl” descends from the ancient language of the “Mexicas”. This poem speaks of death, reincarnation and resignation to death, or even more, of the Mexicas’ vision of death.
Some words from Adrian Benegas about:
“I got to know this poem in 2016 and I was fascinated from the first moment by the “Náhuatl” language and the concept that the poem contains. Well… when I finished the new songs last year I realized that they had something in common without having looked for it. All the songs for this year have within themselves, the concept of “goodbye”, of the things that sometimes happen and keep us away from the people we value, and that ends being like an inner death to open the door to something new, to an inner transformation… I think the songs can also be listened from the point of view of death itself, of the doubts we have about where we go after death, if there is something after leaving this world and all that kind of doubts that comes to our mind when we think about that matter. That’s the good thing about art, that we can find different point of views within itself and identify ourselves with it.
When I realized all this, the memory of Natalio Hernández’s poem came to my mind and I thought that it would be perfect to use it to represent all the songs. So, I wrote this intro and invited the Mexican writer María García Esperón to narrate this beautiful poem.”

Today, Australian powerhouse POLARIS have released a brand new live video for ‘Consume’. The footage from the video was filmed during Impericon Never Say Die! European Tour with EMMURE back in November 2017. Check out the video here: