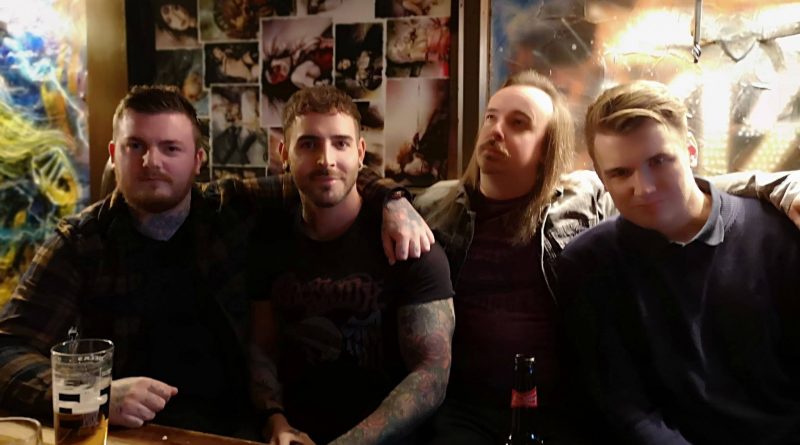 I, ASSASSIN are a high-energy, dynamic and exciting 4-piece heavy rock weapon forged in the darkest corner of Shropshire, UK. Formed out of the ashes of two ill-fated bands, I, ASSASSIN is a coming together of 4 distinctly different individuals unified under a single vision; – create and perform outstanding and infectious original rock music, playing whenever and wherever they can until the wheels fall off or they achieve world domination. I, ASSASSIN is a sonic juggernaut of sound, with a focus on big riffs, bigger soaring choruses and a fist-pumping drive. With a disciple of old-school classic rock on guitar, a hair-metal bassist, a pop-punk drummer, a metalcore singer, and a collective list of influences so broad and diverse, it’s almost impossible to define their sound…the only guarantee they give is it will be loud, it will be fast, and it will leave you with a grin from ear to ear. After spending almost a year developing their signature sound, they made their live debut in March 2017 to instant praise and acclaim. A strong debut year followed; performing as finalists in both Metallum & Soundwaves music competitions, and unleashing numerous blistering headline shows across the West Midlands.Their self titled EP, is now available on all major music platforms!

Canadian metallers All Else Fails are ready to release their new album ‘The False Sanctuary’, coming 2 years after the last critically-acclaimed full length ‘The Forever Lie’. Keeping with their tradition of crushingly heavy and progressive metal they have composed 2 new songs for this album and included 5 B-sides from ‘The Forever Lie’, which were never released digitally.

To accentuate this album they have also released a music video for the first single ‘A Dream of Names’. Technical guitar parts are juxtaposition against melodic vocals in the band’s 10th music video, a moody visual for the thought provoking lyrics that address the current state of the world.

“In a lot of ways this album is at a state of the union address. It’s been 2 years since the release of The Forever Lie, and already the themes of financial corruption, abuse of religious power, and political scandal seem tame. I wrote this one half with a sarcastic smirk, half with an crippling sense that we are well past the point of return.” says Barrett Klesko (vocals, guitar).

Watch ‘A Dream of Names’ below:

ODDKO, a Los Angeles based music project in conception since 2011 and created by musician and award-winning visual director Giovanni Bucci (www.giovannibucci.com), is a manifestation of the animal within – the wild beast in all of us – driven by instinct and the longing to break free of society’s cage.

The project’s debut 13-track album, Escape The Maze, is the fruit of Gio’s eclectic tastes, passion, and his desire to make a vibrant new multifaceted work of art. The album’s soundscape includes a range of influences from metal and alternative, to classical, electronic, and cinematic sounds.

The album’s first single, “Disobey,” delivers an engagingly dark surreal experience, a taster of the album’s  observations on contemporary society. The video for the track was directed by Gio himself and produced together with Paola Rocchetti through visual arts production company Void n’ Disorder(www.voidndisorder.com). “Disobey” explores themes of Man vs. Machine, of Nature vs. Technology, and paints the goddess Hekate as a 21st Century nightmare, ensnaring victims and bending them to her will. The video beckons to the beast within, the hungry animal straining against the leash. A call to the wild: Disobey.

Following the November 2018 premiere of “Disobey,” ODDKO will be releasing a new track from Escape The Maze every month for the next year. Gio partnered with Rocchetti, through Void N’ Disorder Shop (https://voidndisorder.com/shop/oddko-merch/)  to design a small designer apparel line inspired by “Disobey” music video as well as having his more traditional band merch in the works.

Prior to the ODDKO project and the release of Escape the Maze, Gio has blazed his own trail in the industry. His background is multicultural; spending his life across four countries (Italy, Netherlands, UK and USA), which has deeply influenced his approach to music and art. He’s directed two award-winning videos for Korn, with additional music clients including Jane’s Addiction, MGMT, Andrea Bocelli, Timbaland, and Lindsey Sterling. He’s also done notable work as a motion designer for films such as Star Trek, RoboCop and Pacific Rim, while his services have been commissioned for high profile clients including Disney, Red Bull, MTV, Warner Bros, BBC, and Netflix.