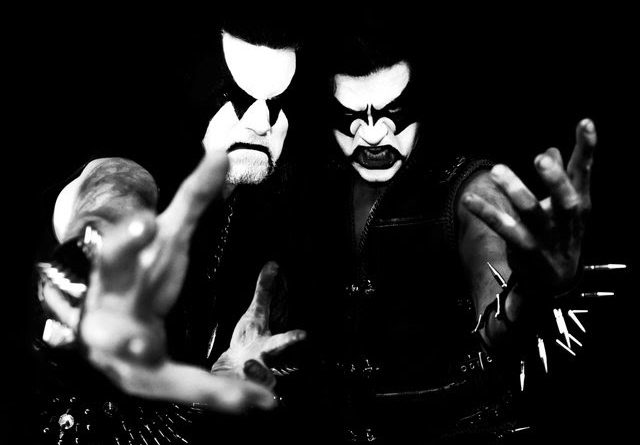 IMMORTAL unveils the title track ‘Northern Chaos Gods‘ from their upcoming album which will be released on July 6th 2018 by Nuclear Blast Records. The song premiere comes in form of a first digital single, and limited 7” vinyl singles of the title track will be out on May 25th.

Stream the new track on Spotify, Deezer or Apple Music:
http://nblast.de/ImmortalNCG
A lyric video made by Nuclear Blast can also be seen below:

With rabid furore, teeth-baring aggression and an eerie cold that crawls deep into the very bones of the listener after only a few unrelenting seconds, IMMORTAL is about to erect a new superior kingdom of frost on top of their existing legacy. The song ‘Northern Chaos Gods’ consequently, holds the very essence of IMMORTAL; a distillate of grimness that will once again heave the band onto the ice throne of Norwegian black metal.

Save your copy here: http://nblast.de/ImmortalNCG

In addition, very limited 7” vinyl singles of the title track ‘Northern Chaos Gods’ will be out on May 25th – the red vinyl is already sold out, but black and white are still available, here:
http://nblast.de/ImmortalNCGSingle

orget everything you thought you knew, because FOLLOW THE CIPHER are ready to herald in a new musical era and crash through the dimensions of our universe to steal your breath. Despite their stylistic diversity, the Swedish metal act from Falun creates a very cohesive ambience, mixing a first class sound with magical charisma, an innovative concept, live presence and an incredibly talented singer.

The wait is finally over – FOLLOW THE CIPHER‘s self-titled debut album is out now! Its cover artwork was created by no less than SABATON‘s Chris Rörland. To mark the occasion, the band has launched a new live video of the opening track, ‘Enter The Cipher’. Watch the video, recorded at Masters of Rock 2017 (Vizovice, CZ), which can also be found on the album’s bonus DVD, below:

Order »Follow The Cipher« now, here: http://nblast.de/FollowTheCipherFTC
Order the album digitally, here: http://nblast.de/FTCValkyria
Save the album via Spotify: https://tools.topsify.com/follow/6829/pre-save-the-album-follow-the-cipher-by-follow-the-cipher
Listen to the band’s songs in the NB Novelties Playlist: https://open.spotify.com/user/nuclearblastrecords/playlist/6aw9wiedFzzhJiI96DhNhw

Swedish classic rock connoisseurs GRAVEYARD are about to release their highly anticipated comeback album »Peace«, on May 25th through Nuclear Blast. Now the band releases another brand new song off their forthcoming record. Watch the music video for ‘The Fox’ below: