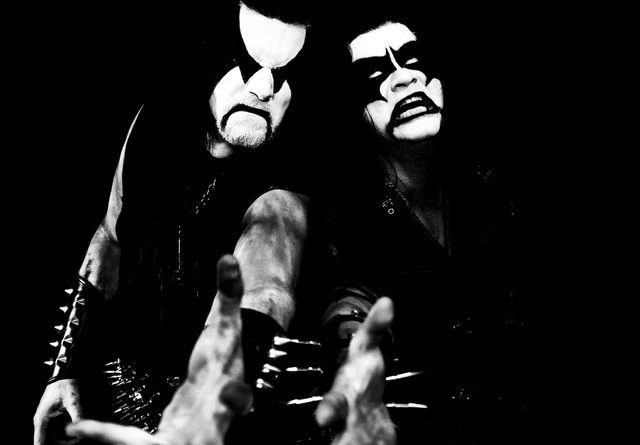 Only one week left until IMMORTAL will release their highly anticipated new album »Northern Chaos Gods« that marks a return right to the raw roots of the band! Today, the Norwegian black metal legends unveil their second single, the 9-minute-long hymn ‘Mighty Ravendark’, which is not only the longest track in the band’s history to this date but has also been named ‘best IMMORTAL song of the past 20 years’ by Germany’s Deaf Forever Magazine. Listen to the track that concludes the blistering journey that is IMMORTAL’s new album and experience the finale of one of their grandest efforts.

Listen to the single here: http://nblast.de/ImmortalRavendark
Or watch the lyric video below:

You can now pre-order the band’s new full-length release, »Northern Chaos Gods«, in the format of your choice. It will be available as digipak, 180g LP (various colours) in gatefold, a collector’s boxset, strictly limited mailorder steel box or digitally:
http://nblast.de/ImmortalNCG

Germany’s progressive death metal masters OBSCURA have shared the third single from their highly anticipated impending full-length album Diluvium. Listen to the exclusive premiere of the song “Ethereal Skies” below:

Obscura has also released an official playthrough for the album’s tite track. Watch it HERE, courtesy of Gear Gods.

OBSCURA’s fifth studio album Diluvium is due out July 13th on CD/LP/Digital via Relapse Records. Physical packages are available via Relapse.com HERE and Digital Downloads / Streaming Services AT THIS LOCATION.

Ice Nine Kills will release their new album The Silver Scream through Fearless Records on Friday, October 5. The album’s 13 anthems are based on 13 respective horror classics. The physical pre-order is available here.

The band has shared the cinematic video for “The American Nightmare,” which is a tastefully done homage to director Wes Craven’s A Nightmare on Elm Street franchise. It’s a visual and thematic feast for children of the ’80s who grew up loving Freddie Krueger, the first film, and its sequels. It’s accompanied by a hooky chorus that commands the listener to sing along.