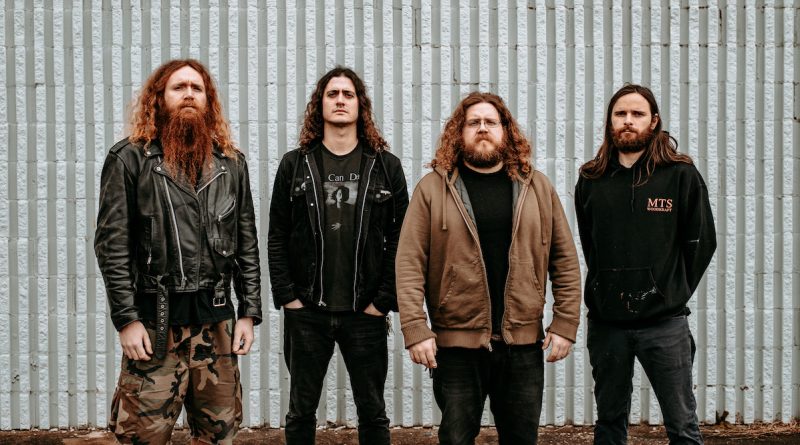 Listen to “Citadel” below:

Vocalist Mike Paparo comments: “The lyrics to “Citadel” were written as a sort of clarion call to myself about overcoming depression and the demons that manifest with it. It, like most of the lyrical content on the record, is deeply personal to me. For the band as a whole, Sulphur English is an ill-tempered, unrepentant act of defiance towards stagnation and complacency. We create this music on our own terms and we refuse to compromise our collective vision, for better or worse.”

Sulphur English is due out April 12th on CD/2xLP/Digital. Physical packages are available for pre-order via Relapse.com HERE. Digital Downloads / Streaming Services are available HERE.

HELL’S GUARDIAN today released a brand new lyric video for their third single, “My Guide My Hunger,” from their latest album, “As Above So Below.” Guest vocalists are Adrienne Cowan of Seven Spiers and Marco Pastorino of Temperance. Thematically, the powerful, striking and catchy song is about desperation and hope very often lying pretty close to each other.

In a richly worth listening, play-cultural high-quality intersection of Amorphis, Edge Of Sanity and In Flames, the band has musically found itself entirely. The quartet’s EPIC MELODIC DEATH METAL, which was arranged as elaborately as lovingly and often upliftingly pompous, also made its own unique, stylistically and thematically unbreakable way. In July 2015, the lombard hellguardians released an EP titled “Ex Adversis Resurgo”, which was able to receive many positive responses.

taly’s hard-rocking alternative metal band NEREIS have revealed a new music video for the song “Now”. The video was directed by Maurizio Del Piccolo, and filmed on location at Adrenaline Stadium (Moscow), and A2 Green (St. Petersburg) while the band was on tour in the Russian Federation during November, 2018. Watch the video right now below:

“Before leaving, everyone in Italy told us to taste some authentic Russian vodka” says guitarist Sam Fabrello. “I got back, and I totally forgot to bring some home! Shall we go back to Russia? Of course, I think it may be soon…”Singer Andrea Barcheisi continues, “It was the greatest experience of our career so far. There were more than 4,000 people in St. Petersburg, and 8,500 in Moscow. When our manager said to us that both gigs were sold-out, I was a bit nervous because it was the first time that we played in front of so many people.”

“Now” is taken from the band’s latest album Turning Point which was released on June 8, 2018 via Eclipse Records. The album received critical acclaim from dozens of media outlets and radio stations all over the world. To date, the band have released three music videos supporting the album, for the songs “Breaking Bad”, “Overdrive”, and “Two Wolves” which have surpassed a combined 24,000 views on YouTube.