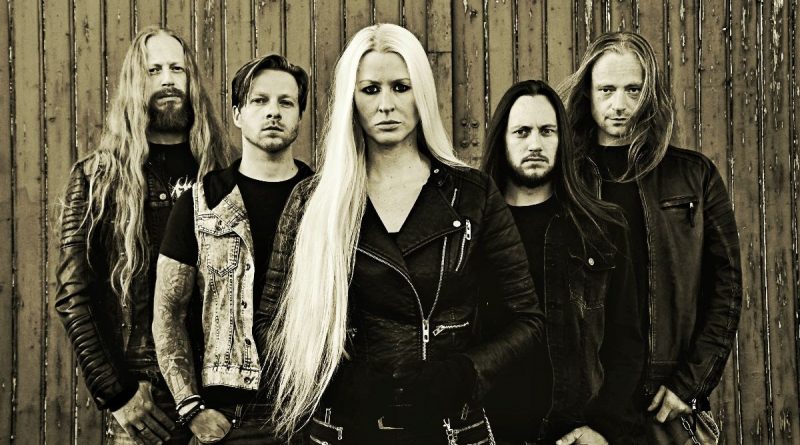 Dutch death thrash ragers IZEGRIM have released a video for the song ‘Retraumatized‘ which is taken from their latest EP entitled ‘Beheaded By Trust‘. Check it out here:

The video follows the band throughout their performance at the sold-out Eindhoven Metal Meeting festival, which took place on the 14th of December. The video was directed by Sebastiaan Spijker from Ik Wil Ook Een Videoclip.

IZEGRIM’s Marloes comments: “From preparations, to soundcheck, to the gig at the prestigious sold out Eindhoven Metal Meeting: it’s all packed into Izegrim’s latest videoclip. No expensive props, no bluescreens, no storyline or silly choreography. This is 100% IZEGRIM at its best!”

The track was recorded, mixed and mastered at Kohlekeller Studio (ABORTED, BENIGHTED,..) in December 2017. The cover artwork came courtesy of Kirill Semenov. ‘Beheaded By Trust’ is the follow-up to 2016’s ‘The Ferryman’s End’, which drew a positively roaring press response worldwide and saw the band touring and sharing stages with the likes of FLOTSAM & JETSAM, KREATOR, ANNIHILATOR, ONSLAUGHT and more.

Exhibiting their elegant and gloomy music around the world, Palma, Spain’s melancholic doom outfit HELEVORN have posted their new lyric video “A Sail To Sanity“ in support of their fourth album“Aamamata” due out on January 23rd via Solitude Productions / Bad Moon Music.  “Aamamata” follows their 2014 album “Compassion Forlorn”, 2009’s “Forthcoming Displeasures” and 2005 debut full length “Fragments, which have anchored HELEVORN’s place in the global doom scene.

The band comments:
“We think that fans will love the new album. We know that we are not discovering something new, we are creating 90’s goth-doom metal in present times. It should be received like a piece to reborn the scene and for the music to relate on the decadence of humankind through the drama of the refugees that are dying and trying to escape from the hell that the Western countries have put them in.”

With more and more fans craving the somber tones and dreary vocals, HELEVORN has brought their dramatic intensity to many European festivals including Dutch Doom Days, Gothoom Open Air, Wave Gotik Treffen, and Madrid is the Dark Fest. They are also bringing their gloom to Canadian cities this coming May for their first cross country tour with Solitude Productions label mates Mexico’s Majestic Downfall (dates listed below).

Forged in a cauldron of conflict, born of a fiercely independent spirit that refused to be broken and constrained by oppressive regimes and religious and political dogma, Beyond Pain And Pleasure: A Desert Experiment is the story of one man’s unending defiance. Death Tribe is a raised fist in the face of corruption and domination.

Anthony Kaoteon, now a resident of The Netherlands, was born in Beirut and it was in that maelstrom of warfare and radical ideologies that the songs for Death Tribe were conceived. Refusing to accept the life that fate had decreed for him, Anthony fled Lebanon for Dubai where he found himself connecting with other rebels who had escaped the shadows of oppression. These kindred spirits contributed an array of visceral vocal performances to Beyond Pain And Pleasure…, bringing the album to raging life. Musically speaking, Anthony was able to complement his own remarkable skills with the experience and dexterity of drummer Mattias Landes (Dark Fortress) and bassist Linus Klausenitzer (Obscura) – a formidable team indeed! Speaking of his time working with Death Tribe Mattias Landes offered this evaluation,

“I think we succeeded in creating something really cool… All I can say is: expect the unexpected!”

“This album is very diverse and full of energy. The Death Metal scene is still growing but I can see that a lot of bands forget about the intensity of this music. This album makes you feel like being at a metal concert! I am very happy that Anthony invited me to play on this album!”

Already known for his work with Kaoteon, Death Tribe is Anthony’s most powerful musical statement to date. So much more than a collection of songs, Beyond Pain And Pleasure: A Desert Experiment is a staggering achievement against all the odds, the sonic distillation of absolute defiance. This epitomises everything that metal was ever meant to be. Available from February 22nd 2019, Beyond Pain And Pleasure: A Desert Experiment draws on sounds from a myriad of different metal territories…heavy metal, death metal, black metal, thrash metal… they all contribute to Death Tribe’s DNA, each strand entwining with the next  to form this vibrant, vital, cohesive beast of an album.

“I dedicate this album to those who keep chasing their dreams, to every person that was born with a tag on his forehead and defied the world to make his own statement heard – I will die soon but the music stays to remind those who listen of a man who didn’t obey”  – Anthony Kaoteon