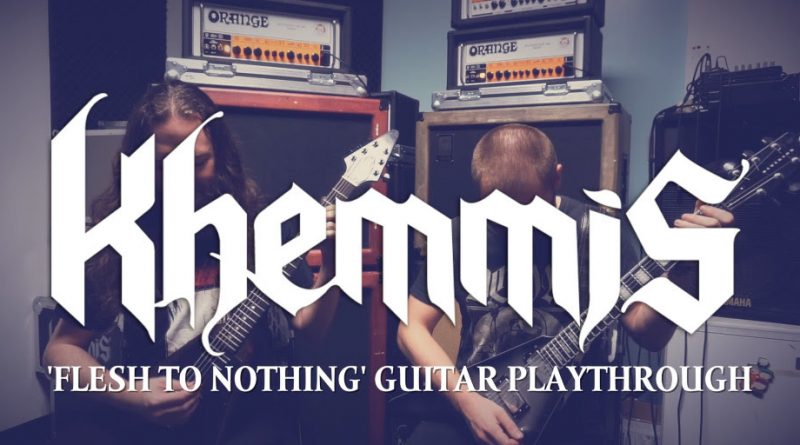 KHEMMIS | ‘Flesh To Nothing’ Guitar Playthrough

Hailing from Denver’s thriving doom-metal scene, KHEMMIS captivated fans with their latest album Desolation, which was released on June 22nd of this year via Nuclear Blastin Europe. Combining traditional doom with THIN LIZZY-style hard rock, the band have honed their craft to blend both extreme and old-school influences more seamlessly than ever before. Ill-omened melodies alongside chugging, galloping riffs set the tone of the album and in a special trailer being unveiled today, duelling axemen Phil Pendergast and Ben Hutcherson play through new track, ‘Flesh To Nothing’.

Check it out below:

“With Desolation we wanted to make a record that celebrated our love of the metal that got us into heavy music in the first place while still adding our own spin on that sound,” explainsPhil. “For me, ‘Flesh to Nothing’ is the song that most explicitly captures that spirit. My vocals were very inspired by both Rob Halford and Nick Holmes here, and the riffing has a lot of heavy metal swagger, making it one of my favorite tracks to play. The vocal climax into the dueling guitar solos is one of my favorite moments on the new record.”

Ben adds: “We chose ‘Flesh to Nothing’ for this guitar playthrough because it covers a lot of ground — a somber, downtempo chorus gives way to a galloping bridge early in the song, while the vocal interplay during the black metal pre-solo break alludes to the dueling guitar solos near the end. Oh, and let’s not forget all of the harmonized guitar lines — we channeled Iron Maiden quite a few times in this track! Over the years, lots of fans asked how we write and play these songs, so we felt that ‘Flesh’ would serve as an ideal introduction to playing our brand of doomed heavy metal.

November 16th – next week Friday – sees ARTILLERY release their new album ‘The Face Of Fear‘ which is the successor to ‘Penalty By Perception‘ from 2016.

The Danes have now launched the 3rd single taken off the album that you can see its videoclip below:

Comments guitarist Michael Stützer: “The story behind ‚Pain’ is a true story, about an alcoholic who was never listening to his friends or family when they tried to make him stop and quit drinking. And when he got to the point where he realized himself he had to stop it was too late and there was no way out anymore. The video for ‚Pain’ was recorded in Kolding and Randers by Morten Madsen (MSM production) who also directed our previous videos for ‚Legions’ and ‚Live by the Scythe’.”

‘The Face Of Fear‘ is the band’s 9th studio album and the third with the current line-up. The record contains nine brand new, straight-to-your-face songs. Make sure to surf over tometalblade.com/artillery where you can watch the video for the first single which is the title track ‘The Face Of Fear‘ and order the album

The Metal world was shocked with the recent demise of the legendary Mark ‘The Shark’ Shelton best known for his work with Manilla Road. In February 2018 Mark and David T. Chastain began discussions about releasing some music they had recorded together in the late 80s. Over the following months they worked together in getting everything ready for release in late 2018. Just 2 days before Mark’s passing he was sending in thoughts and comments to be included in the final product. Everyone involved knew how excited Mark was about this release and we wanted to make sure it was released exactly in the way Mark wanted. This is the story of that release.

Metal Icons Mark Shelton (Manilla Road) and David T. Chastain (Chastain) joined forces back in the late 80s to record a collection of songs that they planned to release at some point. Little did they ever envision that it would be 30 years later!! While the audio quality may not be up to today’s major label studio standards the musical quality of this demo is top notch. Mixing David‘s music and Mark’s voice resulted in what can only be described as “Classic Metal for the Ages.”

Mark recently said: “David had contacted me after my band, Manilla Road, had released the ‘Out of the Abyss’ album with his label, Leviathan Records. He had these songs written musically but no vocal parts. He set me on the task of putting lyrics and melodies to the songs. I remember feeling very flattered and honored that he had thought of me for this endeavor.”

“‘Edge of Sanity’ is a song that is about a curse on a Pharaoh’s tomb. ‘Fields of Sorrow’ is about the effects of nuclear holocaust. ‘Orpheus Descending’ is the huge epic of these songs that was quite the challenge to write. Primarily because of the topic I chose. It is a musical retelling of the Greek tale of Orpheus going to Hades and trying to bring back his love from death with his magikal music.”

“I personally have always thought that, even though these songs were demo recordings, all of them were maybe the heaviest stuff David had ever written. And I still think that his guitar work on these songs is some of the best he ever did. So I’m very pleased to see this music finally find the light of day and find its way to the ears of the public. I have always had high regard for David and his musical capabilities and it was and still is an honor to call this great musician friend. I hope you all enjoy this material as much as I do. Hammer Up and Nails Down.”

David adds: “I have always been very impressed with Mark’s intelligent lyrics, melodies and his unique and dynamic voice. Mark and myself really weren’t worried about any sort of commercial success when we recorded this music and we were just having fun. I am not sure why we never went into a professional studio and recorded these songs other than maybe we didn’t want the distraction from our main bands. We more or less just forgot about the music over time as we both wrote and recorded mountains of material over the years. There are a few mistakes here and there that I would like to fix but we no longer have the multi-track tapes to do so. So it is what it is, warts and all!”

No one remembers the exact completion date of the recordings. It may have been recorded over a couple of years as this was a side project. Manilla Road and Chastain were their main focus. However it is agreed the project started in 1988.

David says: “I have always loved these songs and my band Zanister actually covered the track “The Edge of Sanity” back on our first album. All of these tracks are still cool to me. There are 2 versions of ‘Orpheus Descending’. One is around 12 minutes and we have a long version that is over 20! Definitely the longest songs I have ever released. It was cool to record such epically long tracks and try to make them cohesive. Especially with 2 different versions! Mark’s amazing epic lyrics tell the same story it is just the music that is expanded on the Extended Version. With Mark now gone I will always think very highly of this music and I still marvel at his talent.”

After all is said and done it seems SHELTON CHASTAIN was a collaboration watched over by the Metal Gods!

Dedicated to the music, lyrics and memory of Mark ‘The Shark’ Shelton