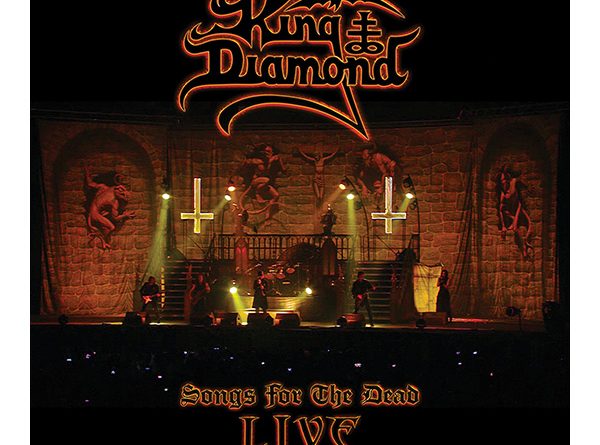 On January 25th, KING DIAMOND will release a new DVD/Blu-ray, ‘Songs For The Dead Live‘, via Metal Blade Records.

There is only one KING DIAMOND, and for more than thirty years the great Dane has been dropping classic albums and putting on shows fans remember for the rest of their lives. Perhaps the only downside to having such a formidable catalogue is that there are just too many great songs to fit into a single set. However, you would be hard-pressed to find a fan who wouldn’t want to hear 1987’s seminal ‘Abigail‘ in its entirety, and ‘Songs For The Dead Live‘ captures this, twice, and in very different locales. Boasting eighteen songs per set, each of the two shows – Belgium’s Graspop Metal Meeting in June 2016 and Philadelphia’s Fillmore in November 2015 – feature a brace of classic KING DIAMOND and MERCYFUL FATE tracks including “Welcome Home,” “Halloween,” and “Eye Of The Witch” before launching into ‘Abigail‘. The performances of the all-star lineup of musicians, comprising of guitarists Andy LaRocque and Mike Wead, bassist Pontus Egberg and drummer Matt Thompson, are absolutely ferocious, hammering home every single moment.

For a preview of ‘Songs For The Dead Live‘, a new video, “Arrival (Live at Graspop)”, can be viewed below:

Fans can also watch “Sleepless Nights (Live at The Fillmore)” at: metalblade.com/kingdiamond – where you can also pre-order the release in the following formats: 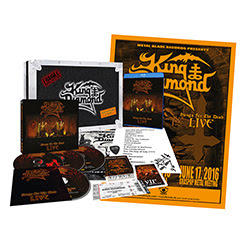 Philadelphia’s DEVIL MASTER stake their claim as one of the most venomous, twisted entities in the underground with their hellish debut, Satan Spits on Children of Light. Today they announce the album’s release March 1st on Relapse alongside lead single “Desperate Shadow“. The album, recorded with mastermind Arthur Rizk (Power Trip, Volahn, Code Orange, Prurient) rattles the very gates of hell with a vile dose of black metal-infused punk mayhem. Satan Spits on Children of Light sees DEVIL MASTER emerge from the grave and reach new blasphemous heights.

“We’re not pandering to any trends or other genres. It’s entirely its own thing. It’s for people to open their minds and have fun with-but also get lost in.”

Such is the gospel according to DEVIL MASTER guitarist Darkest Prince, as it concerns the six-sided musical legion he helped actualize in 2016. Swirling in the ominous fog that clings to the cobblestones of their native Philadelphia, DEVIL MASTER conjure an unholy trinity of death rock, punk and black metal that manages to transcend all three.

Somehow, DEVIL MASTER mark the haunted crossroads where GISM, Christian Death and Bathory meet, a chorus pedal purgatory where Rikk Agnew and Randy Uchida make a blood pact in lethal guitar tandem while black metal miscreants light felonious fires and Satan, laughing, spreads his wings. “When we started, the basic influence was Japanese hardcore,” Darkest Prince explains. “But we’re all fans of goth and black metal, so eventually that seeped in naturally. This album is the fruition of that sound. We’ve created an elemental spirit that we’re putting our energy into, and we’re just going along with it.”

Elemental spirit? As it turns out, the band is comprised of six practicing magicians, one of whom also happens to be a Satanist. “I’m the only Satanist in the band, but all of us believe in chaos magick to an extent,” Darkest Prince says.  “Nothing is true, everything is permitted! This famous chaos magick maxim explains our attitude towards certain themes, tones and actions that closed-minded sheep dogmatically believe belong to any specific, convoluted subgenre.”

Of course, the Prince will be the first to concede that “it’s hard to not sound cheesy when you say your music is influenced by rituals.”  But at the same time, rituals have always been a part of his life-they just used to come in a more socially acceptable package. “I grew up a really strict Catholic, so I always believed in the power of prayer,” he reveals. “And that turned into the power of the mind.”

Though all six band members are in their 20s, DEVIL MASTER is not their first foray into the dark arts. Darkest Prince has been playing bass onstage with hardcore legends Integrity for the past two years, while bassist Spirit Mirror fronts post-punk outfit Blank Spell and was a member of the mostly female hardcore troupe S-21. Not to be outdone, keyboardist Dodder plays in Grave Turner with members of punk-pop darlings Sheer Mag.

After a pair of self-issued, self-recorded cassette releases-2016’s DEVIL MASTER demo and 2017’s Inhabit The Corpse EP (both of which were later fused together on 2018’s Manifestations compilation) – DEVIL MASTER greets the final year of this bizarre decade with their first proper full-length. Satan Spits on Children of Light is available for pre-order here.

Captured on film by director Denise Korycki for Wild Wind Productions, she worked closely with King on every aspect of filming, and throughout the viewer finds themselves front and center as the shows unfold. This includes some inventive camera placement, such as riding in on the back of the wheelchair as it is wheeled out to “Out From The Asylum” at the start of the show, or looking up from the coffin at the commencement of ‘Abigail‘ opener “Funeral”, which adds an extra dimension to proceedings. Naturally, the theatricality that has become synonymous withKING DIAMOND is there in full force, making for an even more immersive experience. The gothic stage set and the participation of actors playing out certain scenes tying into the songs definitely increases the drama and the sense of complete disconnect from the trappings of reality, ensuring that the shows remain riveting from start to finish.

While the setlists are virtually identical, the drastic difference in the two venues make for distinctly different atmospheres. The sweeping, epic scale of Graspop and the virtual sea of baying metalheads makes for a particularly thrilling spectacle, King holding them all in the palm of his hand. The Fillmore show is immediately more intimate, and rather than a mixed bag of metal lovers drunk on a weekend of the heavy stuff, the audience is comprised entirely of theKING DIAMOND devout, screaming back every word, their love for their hero bleeding from every frame. ‘Songs For The Dead Live‘ gives those who missed out on seeing these shows in the flesh a chance to vividly experience them, offering so much deeper an experience than your run of the mill live DVD.

WINDSWEPT, the Ukrainian black metal formation founded by DRUDKH mastermind Roman Sayenko, are premiering the second track from their upcoming album ‘The Onlooker’. The song “Gustav Meyrink’s Prague” is streaming below:

‘The Onlooker’ will be released via Season of Mist Underground Activists on February 8.