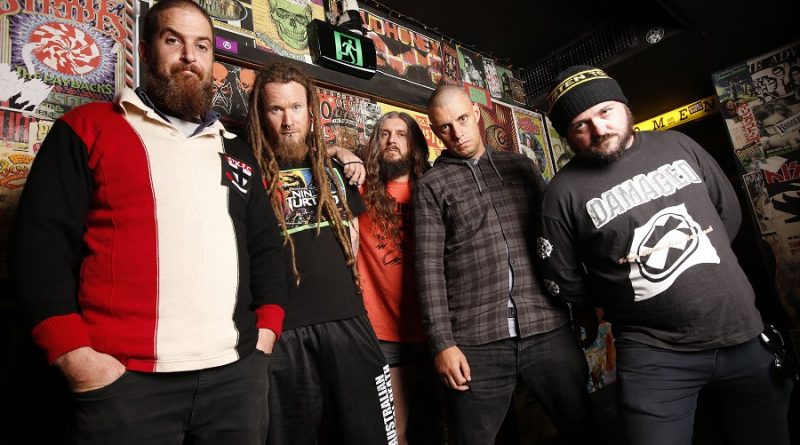 This latest installment from KING PARROT exceeds the wildest expectations for an acerbic and unapologetic slab of thrash metal. Fierce lyrics, spiked with grindcore intensity, and dusted with shades of hardcore-infested punk attitude, the album sets the bar higher than its predecessor, “Dead Set”, from 2015.

“Ugly Produce” offers ten tracks of distinctively punishing and powerful anthems, veined deeply in the extreme underground sound. After recording the previous album in the US, 2017 saw the band head back home to where it all began – recording their third full-length album with Blood Duster‘s Jason PC, at the enigmatic Goatsound Studios. The mastering was done by Brad Boatwright at Audiosiege Studio(Sleep, High On Fire, Nails) in the US, while the cover artwork was created by Boyd Synnott and Simon Robins for GraphOrlock.

Commented by KING PARROT: “Ugly Produce reaches new heights in abrasive song-writing and serves up an odious pile of repulsive flavors you wouldn’t want to find on your local fruit and vegetable shelves. A repugnant harvest of gnarled and nasty grind, death metal, thrash, and punk rock and it’s more caustic than ever”.

Belgian dark rock outfit DIABLO BLVD has just played their new single ‘Summer Has Gone’ live on Belgian national TV at the popular late-night talk show “Van Gils & Gasten”. The song is taken from the highly anticipated new album »Zero Hour«, which is scheduled for September 22th, 2017 release worldwide, via Nuclear Blast. Earlier this year, the band released 3 music videos for ‘Animal’, ‘Sing From The Gallows’, and the aforementioned track, which can be watched below.

Vocalist Alex Agnew comments: “We’ve never been your typical metal band and on this album we also reflect this in the artwork. Art is resistance and individuality is key. You can’t have something real to say if you sound like everybody else. We definitely have our musical influences and we never try to hide them, but it’s the combining of these influences that makes us unique. Like I said before: the things we look for are dark, heavy riffs and atmospherics combined with strong vocal melodies. There is great beauty to be found in the darkest things. Music only means something if it tells a story or conveys a feeling. Anything else is basically masturbation, and that should be done in private!”

Chicago Instrumental Dark Music Band THE KAHLESS CLONE have released a guitar play-through video for “If Only We Had More Time Together…,” a track from forthcoming EP Our Never-Ending Loneliness. View the video below

Our Never-Ending Loneliness will be released November 3 on digital and CD formats. Featuring NOVEMBERS DOOM guitarist Vito Marchese, the new EP builds on the foundation established with stunning debut EP An Endless Loop, and forges the vibe of dark metal, with the sonic landscape and emotional buildups of post-rock.
Stream first single “Is This What You Wanted” and pre-order Our Never-Ending Loneliness at: https://thekahlessclone.bandcamp.com/album/our-never-ending-loneliness
In other news, THE KAHLESS CLONE has a launched a new website. Check it out at:
www.thekahlessclone.com