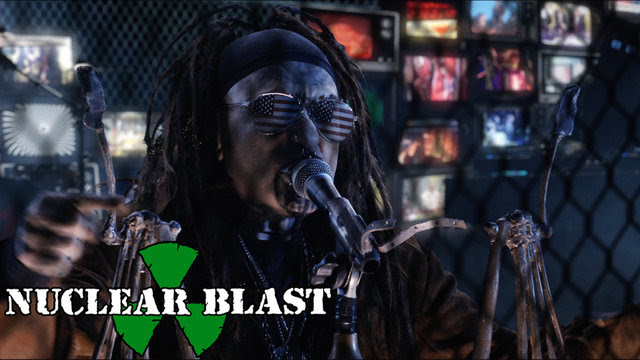 Today, MINISTRY releases a surreal and provocative new music video for the track ‘Twilight Zone’ from the band’s upcoming album, »AmeriKKKant«, due out March 9 (Nuclear Blast). Building upon the themes of the song, the ‘Twilight Zone’ video takes the viewer on a macabre excursion through the current U.S. news media climate of misinformation, corporate propaganda and hypocritical slander.
“We are in completely uncharted territory now,” said MINISTRY’s Al Jourgensen, “witnessing the unraveling of what was once a functional democracy. Our government is under attack. Our planet is under attack. It’s time for a major reboot.”
Click here to check out the ‘Twilight Zone’ video:

The ‘Twilight Zone’ video was produced by Chris Roth and Steve Roth for The Other House production company, the same group that produced Jourgensen’s previous music video, ‘I’m Invisible’ for his 2016 SURGICAL METH MACHINE release. Chris Roth also directed the ‘Twilight Zone’ video with Steve Roth as Director of Photography and editor. The Other House has produced a wide array of broadcast design projects for Revolt TV, Nike’s Kobe 8 System, MTV, Aol.RISE, the Syfy Network, VH-1, CNN, PBS, “The Profit” on CNBC, the 2017 Emmy Awards and many more.

Said Chris Roth, “I’m a life-long fan of the band and very politically active. Not only was this an opportunity to collaborate creatively once again with the one and only Al Jourgensen, but also an outlet for much of my pent up aggression and frustration regarding the current state of politics in our country.”

MINISTRY‘s new album »AmeriKKKant« will be released on March 9 and you can pre-order it here:
http://nblast.de/MinistryAmeriKKKant

Music Theories Recordings/Mascot Label Group will be releasing ‘Ayreon Universe – The Best of Ayreon Live’ on 30 March and are proud to present the second full live video for ‘Valley of the Queens’.

Talking about the song he says. “Here is the second full video track of the upcoming Ayreon Universe DVD/Bluray. The first track we showed you was the bombastic ‘Everybody Dies’, so as a contrast here is a very intimate ballad called Valley of the Queens. Man… even though I’ve seen this a million times by now, I still get goosebumps hearing these lovely three ladies sing… enjoy!”

Ayreon Universe – The Best of Ayreon Live’ will be available on 3LP + MP3, 3LP + MP3, 2CD, 5 disc Earbook, plus 2DVD and Blu-ray with 90 minutes of exclusive behind the scenes footage and interviews with the whole cast.

ABINCHOVA – who recently played a few gigs with Eluveitie in Japan – just released the lyric video for the new single “Gestaltenwandler” – check it out below:

The song is taken from the upcoming album “Weltenwanderer”, which will hit the stores on March 30th and will be released via Massacre Records. The new album was mixed by Tommy Vetterli (Coroner) and mastered by Dan Suter, and is available for pre-order here: https://massacre.lnk.to/weltenwanderer