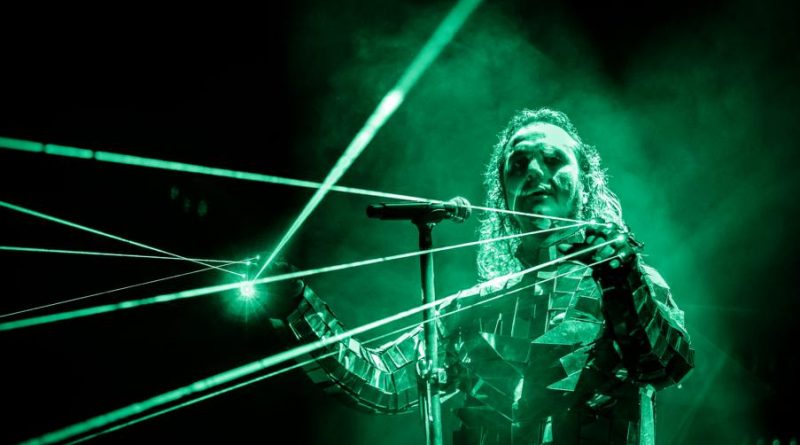 It was a special day for every MOONSPELL fan, when the band invited their “aficionados” to Campo Pequeno arena in their hometown Lisboa on February 4th, 2017. Only 4.000 of them could take part in the unique and solemn spell, when the Gothic Metal legends entered the stage. Once again Fernando Ribeiro and his bandmates proved that they are one of the best live acts around.

Playing three sets in one day and being as energetic as MOONSPELL was on that day is just impressive. The intimate bond between fans and band never broke in all these hours of ultimate alchemist magic. You can see and feel that in every second of Lisboa Under The Spell.

The setlist itself is breathtaking: Starting with their first full length album ever, Wolfheart, from 1995, followed up by the second album, Irreligious, from 1995, they took a long step by jumping to the year 2015 in their last set, presenting Extinct to the frenetic masses in front of the stage.

Now the band releases a third new live clip from Lisboa Under The Spell. It’s the title track of the 2015 album “Extinct”.

Fernando Ribeiro on the video:
“Now that the DVD is out, I guess a lot of our fans already made up their minds about it and I guess rather were as surprised about its final epic form as we were surprised by the, no-bullshit, honest and very solid reactions to our new LIVE release, praise, great reviews, chart entries at all. As far as I am concerned LIVE releases don’t make the cut sometimes. That’s why the Lisboa Under the Spell you might or might not have already in your hands was so carefully thought out and packaged, reminding us of the very few LIVE releases that make us sit in the couch and watch or listen the hell out of. Records like Life After Death (Maiden), Earth Inferno (Fields of the Nephilim) and a few others. Those, with all due respect, were the ones who inspired us to do better. The addition of the album Extinct makes perfect sense to us, as this is the musical thread we are going to follow with the next opus and also because that was the last date of our very dear Road To Extinction tour that started off in 2015 and ended in our hometown, Lisbon on February 2017 e.v. We hope you enjoy this new clip from the title song “Extinct,” featuring the lovely and dangerous Portuguese actress Carolina Torres, brandishing the sword and watching her pack rocking out. Before the lights go out.”It was definitely about time, since MOONSPELL aficionados have been thirsting for a new live release ever since Lusitanian Metal (2008)! Thus, Lisboa Under The Spell is not simply a visual testimony to the success of Portugal`s biggest metal band – it is a celebration of the unbound creativity and pure magic that is MOONSPELL.”

Order Lisboa Under The Spell HERE!

Spanish melodic death metallers Rise To Fall have published a brand new video for the single “Acid Drops”, which was taken off from the band’s upcoming and fourth full-length, “Into Zero”, which is set to be released on September 30th.

You can watch the video at this location:

You can pre-order “Into Zero” right here:

San Diego based rock trio EARTHLESS will release »From The West« on September 28 via Silver Current Records (vinyl and cassette) and October 19 via Nuclear Blast (CD, cassette and digital). »From The West« was recorded live at the Great American Music Hall in San Francisco, CA on March 1, 2018. Today, the band has released the first single in the form of a live rendition of ‘Electric Flame’, here:

Pre-order the album in various physical formats at http://www.nuclearblast.com/earthless-live today! Pre-order digitally to receive ‘Electric Flame (live)’ instantly.
Get the song here: http://nblast.de/EarthlessElectricFlame
Pre-save the album via Spotify: http://nblast.de/EarthlessFTWpreSave
Listen to the track in the NB Novelties Playlist: https://open.spotify.com/user/nuclearblastrecords/playlist/6aw9wiedFzzhJiI96DhNhw

Commented drummer Mario Rubalcaba:
“Really excited to share this recent recording that includes some of the newer material off »Black Heaven« (and the CD version also has the only time that we have ever played ‘Acid Crusher’ live). This recording blasts into the skull and chokes the ears dry!”