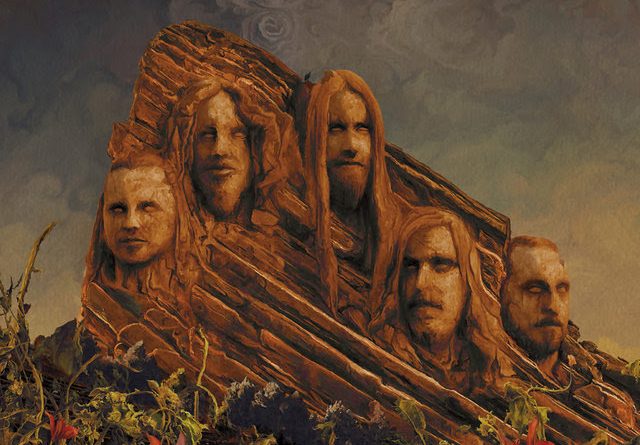 OPETH – unveil new live video of ‘Demon Of The Fall’

On November 2nd, Swedish progressive metal legends OPETH will release their new live album »Garden of the Titans: Live at Red Rocks Amphitheatre« via Moderbolaget Records / Nuclear Blast Entertainment. Captured for DVD, Blu-Ray and Vinyl formats during their performance on May 11th, 2017 at the legendary Red Rocks Amphitheatre in Denver, CO, this concert showcases the unique beauty of both classic and new OPETH tracks. Now, the band unveils the second video from this performance. Watch the epic ‘Demon Of The Fall’, here:

Fans can now pre-order the various formats at http://nuclearblast.com/opeth-gardenofthetitans
Or at the band’s shop: https://www.omerch.eu/shop/opeth

You can pre-order them here: http://nblast.de/OpethGhostOfPerdition
Or at the band’s shop: https://www.omerch.eu/shop/opeth

The promising symphonic/alternative portuguese metal band Secret Chord from Coimbra have just released an official music video for a new original song, entitled “Wraith Of Oblivion”, that will be included on their first full-length record.

Little more than a year after releasing their debut EP “Dimensions Of A Dream”, Secret Chord astonish their fans with a brand new song. “Wraith Of Oblivion” is the title of their most recent composition, revealed last September 8th. The new song’s music video, already available on YouTube, was recorded by Marta Malva in Tentúgal (Coimbra) and Amieira (Soure) and directed and
produced by Bruno Vale (PubliTV). The recording, mixing and masterization was done by João Dourado at Golden Jack Studios, in Coimbra. Below you can see the new video:

“Wraith Of Oblivion” is the follow-up to Secret Chord’s dramatic and melancholic approach in their music about the world they live in, a concept started with “Dimensions Of A Dream”, the four-track debut EP released on April 2017, from which the single “Set The Firestarter Ablaze” stands out due to the theme of forest fires. With “Wraith Of Oblivion”, the band intends to
demonstrate that, in today’s society, every single person is compelled to accept an imposed destiny – albeit subconsciously – becoming a product of the status quo and “social normalization”.

With a powerful sound and a strong melodic support, Secret Chord continues with their symphonic metal path in “Wraith Of Oblivion”, adding some electronic elements, but always with demolishing and pulsing guitars leading the song’s progression. Raquel Subtil’s voice is once again the main attraction, having reached a whole new level of execution and interpretation, easily
demonstrated by the vocal work performed during the recordings, joined by Carlos Pereira and his contrasting and aggressive contribution.

The song “Wraith Of Oblivion” is currently a part of Secret Chord’s live set. The most recent gig was in September 6th, during their hometown’s annual handicraft festival “Poiartes 2018”, where they were featured as the main act in a concert that had the special participation of the mixed choir from “Sociedade Filarmónica Lousanense” and the keyboardist João Carlos Ramalheiro, teacher and director at the “Classplash” music academy from Lousã. On October 6th, Secret Chord will be sharing the stage with Henriette B (Switzerland), Shady Gringos (UK) and portuguese bands like The Temple and Tales For The Unspoken at the “Rock dos Romanos” festival, in Condeixa-a-Nova.

NIRA: new lyric video for “This Is War”

Italian Modern Metal band INIRA released a brand new lyric video for “This Is War”, first single from the upcoming album “Gray Painted Garden” out Worldwide on October 5th via Another Side Records / Metal Scrap Records Inc. You can watch the video below:

You can pre-order the album from the main music platforms from September 5th.

Here you can also find the album artwork (artist: Amanda Vallar) and the track-list: