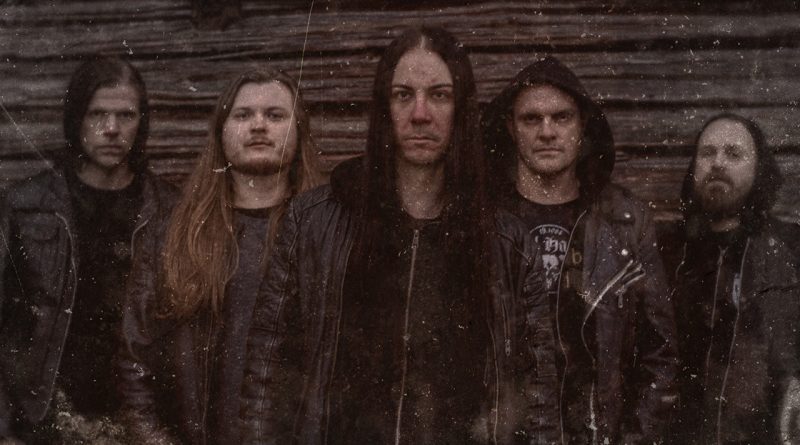 Sweden’s melodic death/doom metallers OCTOBER TIDE release second single from their anticipated new album “In Splendor Below”, set to be released on May 17th worldwide via Agonia Records. Listen to the track “Our Famine”, which is available as a lyric video below:

With a history tracing back to the epicentre of melodic death metal in Sweden, OCTOBER TIDE have come a long way and have generated a spark that is strongly felt in the energy of the scene. “In Splendor Below” is the latest addition to their vibrant discography of guitar-driven, emotive death/doom metal art. It packs some of the most authentic and unique compositions from the capable hands of founding member and long-time Katatonia guitarist, Fredrik Norrman, his brother and guitarist Mattias Norrman (ex-Katatonia), vocalist Alexander Högbom(Demonical), bassist Johan Jönsegård (Letters From The Colony) and drummer Jonas Sköld (Letters From The Colony / Thenighttimeproject). While Fredrikprefers for the music to speak for itself, he finds the new album “a bit more aggressive, a bit more death metal, and with an overall colder feeling than previous records”.

“In Splendor Below” album was mixed and mastered by Karl Daniel Lidén at Tri-Lamd studios (Bloodbath, Katatonia, Breach, Craft). It was produced by Alexander Backlund from Nailvillage Studio (Thenighttimeproject / Letters From Colony) and OCTOBER TIDE. Tomarum av Christine Linde created the cover artwork.

The official video for DEEP SUN’s new single “Worship The Warship” is here – check it out below:

The upcoming album “Das Erbe der Welt” will be released on April 26th via Massacre Records, and includes 12 varied songs with thrilling melodies and surprising twists and turns. Pre-order it here » https://lnk.to/daserbederwelt

“Das Erbe der Welt” was mixed and mastered by Markus Teske at Bazement Studio. Stefan Heilemann is responsible for the album’s artwork.

BARROS is a solo project of Tarantula‘s guitar player Paulo Barros, alongside brilliant and talented musicians such as singer Ray Van D.  “More Humanity Please….” released by Rockshots Records in 2018, has been mixed and mastered by Herry Hess (Harem Scarem)

The album is comprised of very melodic and simple structures with a direct message, with an “all about the song” approach.
Ray Van D’s lyrics explore themes as diverse as “Love as a driving force that goes beyond” and “Come what may feel”, to a critical take on the formatting of Art and Music produced by corporations, “fast food music”; as well as an invitation on the reflection on the ephemerality of Life, the lack of humanity in the World today and the banality of violence in social media, our dependence on technology and a dose of humor that is Murphy’s law:

“Where if anything can go wrong, it will go wrong in the worst way at the worst time and in such a way as to cause the greatest possible harm”

“More Humanity Please…” is made of 10 songs of melodic hard rock and the outstanding artwork was in charge of the Brazilian artist Gustavo Sazes (Gus G, Jeff Scott Soto, Kamelot, etc…)