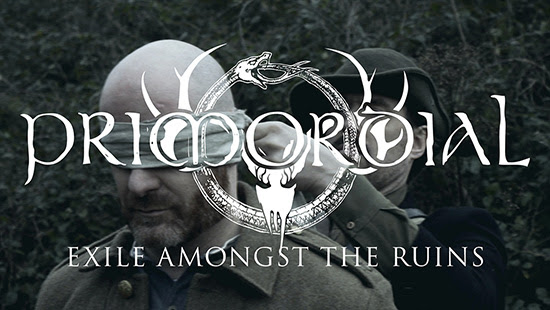 Primordial releases video for new single ‘Exile Amongst The Ruins’

Irish Pagan Metal Gods PRIMORDIAL will release their new album ‘Exile Amongst The Ruins‘ March 30th through Metal Blade Records.  Teaming with producer Ola Ersfjord, who worked on PRIMORDIAL‘s 2016 live album ‘Gods To The Godless‘, the record was tracked at Dublin’s Camelot Studios, located adjacent to their rehearsal room. PRIMORDIAL have now released the 3rd single out of the album. You can watch video for the title track, ‘Exile Amongst The Ruins’, directed by Costin Chioreanu below:

Comments PRIMORDIAL: “This is a simple story. A soldier’s fate that has happened around the world many times and will continue to do so. It is set in Ireland about 100 years ago. Nothing more and nothing less. They are the Ghosts. We are the Ruins.”

Surf over to metalblade.com/primordial to check out the videos for the first two singles ‘Stolen Years’ and ‘To Hell Or The Hangman’. At the same location you can pre-order ‘Exile Amongst The Ruins‘ in the following formats:

Recently brutal death metal band Gutted Souls  shared their news lyric vide od the track “Snakes In Suits”. You can listen to it below:

This track is taken of their last album “The Illusion Of Freedom”, considered by many as one of the best albums of 2017. It’s available in the major streming stores, and it’s fulled with heavy riffs, indicated for the lovers of extreme music. The band is working on new videos and has the intention to make a lyric video for every track of the album.

On April 13th, Boston’s rock/metal outfit GOZU will release their new album, ‘Equilibrium‘, via Blacklight Media Records. For a preview of ‘Equilibrium‘, the new single, ‘The People vs Mr. T’, can be heard now below:

For another preview of ‘Equilibrium’, the video for the first single ‘Ricky ‘The Dragon’ Steamboat’ can be viewed now at: blacklightmediarecords.com/gozu – where the record can also be pre-ordered in the following formats: