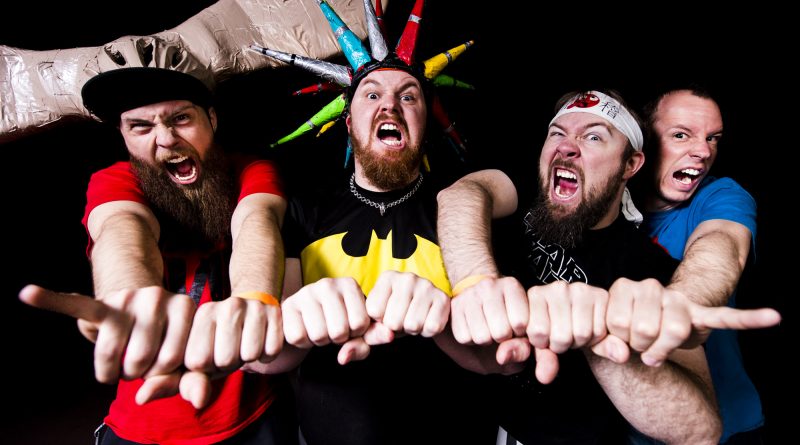 The kings of comedy rock PSYCHOSTICK are kicking off their “The Veloci-Turkey-Saurus Rex Tour” presented by Zildjian in St. Louis, MO on November 2nd and wrapping it up in Pittsburgh, PA on December 9th with support from Arsonists Get All The Girls (on select dates), Kissing Candice and Raven Black. As the band hits the road to share new and familiar material, they have posted their latest video “Adulting”, which will be one of many new tracks planned on their forthcoming album set for release in 2018 to follow their 2014 break out “Revenge of The Vengeance”.

“Over the past couple of years, we’ve transitioned from the tour-tour-tour vagabond lifestyle to having homes and lives again. On the one hand, it’s nice to sleep in your own bed and to have a social group and girlfriends you see regularly. On the other hand, the reality of having to clean, dust, take out trash, taking care of things, mow lawns, etc left us crashing down to reality hard. Over a decade ago I uprooted my stable life as a web designer to go tour, and now I find myself recalling, “Oh YEAH! I remember this stable life stuff! And it’s BULLSHIT!” So this song is dedicated to all our fans that had to plan around their responsibilities to make it to the show.”

Denmark’s female-fronted hard rockers FOREVER STILL are busy working on their second full-length release scheduled for 2018. However, to shorten the waiting time for the successor to »Tied Down« (which was recently nominated as ‘Best Debut’ at the Metal Hammer Awards), the young highfliers now launch the music video for the haunting acoustic version of ‘Scars’. The clip showcases lead singer Maja Shining alone on her piano and even includes some breathtaking a-capella-moments. Watch it here:

Rockshots Records is proud to present Nightland’s brand new single “Astralize”. Produced by Nightland, mixed and mastered at AudioCore Studios, you can listen to it below: