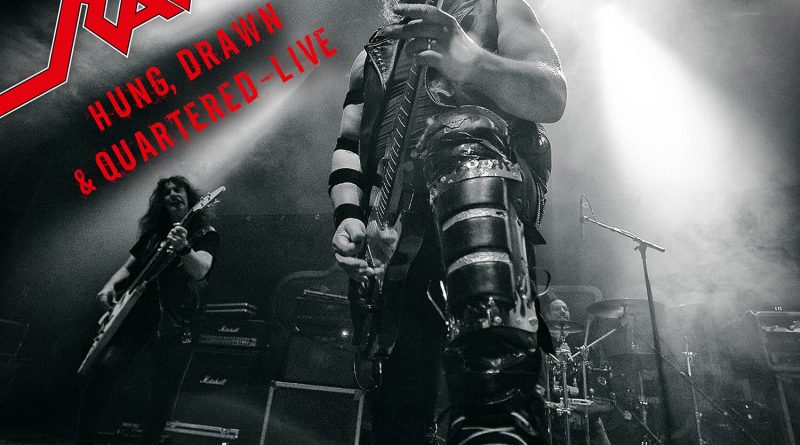 he British/American metal trio Raven releases a new live single and video for the song “Hung, Drawn & Quartered” today. The song is taken from the new live album “Screaming Murder Death From Above:Live In Aalborg”.
You can watch the video here:
Raven expertly combine their own classics with pieces from their latest studio album Extermination, for example ‘Destroy All Monsters’ or ‘Tank Treads (The Blood Runs Red)’ along with songs we haven’t heard from Raven in many years. Bass player and singer John Gallagher says “I believe ‘Hell Patrol’ hasn’t been in one of our set lists in 15 years. The same goes for ‘Hung Drawn & Quartered” we haven’t played that one in a very long time. It was a lot of fun to come back to those songs again.”

“Screaming Murder Death From Above:Live In Aalborg” will be released through SPV/Steamhammer on January 18th, 2019 as CD DigiPak, 2LP Gatefold, download and stream: https://Ravenlunatics.lnk.to/LiveInAalborg

Mentally Ill, Legally Sane contains eight tracks which display the band’s raw power and energy. The first single pummels fans with the pulsating “Madness” talking about corrupt career politicians. Other stand-out tracks are “Stand in Line” which tells the story of a rebel who falls for the lies of the establishment, and the title track “Legally Sane” which was written shortly after the jury delivered a guilty verdict on the trial of James Holmes.

The band have also revealed their first music video from the album for the first single “Madness”. The video was directed by ZANE, and filmed at Studios 60in Los Angeles. Watch it right now below:

“With some much negativity going on in the world today, it’s hard to know who is telling the truth” says drummer Lonnie Silva. “Believing everything you hear and see from the media without checking facts can easily drive a person to madness after a while, so it’s important to take everything with a grain of salt.”

Pre-order the album on iTunes, Amazon, or Google Play, and stream the singles via Spotify, Apple Music, Deezer, Pandora, iHeartRadio, YouTube, and more.

10:13 Release Official Video for New Single “Beyond The Grip of Humanity”

From the mind of multi-instrumentalist/composer Neil Carter and inclusive of a guest appearance by Derek Sherinian (PLANET X), Result of an Iron Age is a bleak, futuristic soundtrack to humanity’s descent into a hellish, post-apocalyptic world. Indeed, the album’s 11 tracks form a cohesive whole, a musical journey that transcends the common constructs of depressive black metal by seamlessly incorporating progressive elements, not the least of which includes rhythmic complexity, obsidian keyboard layering, penetrating samples, and even the periodic use harmonica to create an immersive experience that twists, churns, and chills to the bone.

Carter will be performing a series of local one-man shows with him serving as drummer playing along with the album.