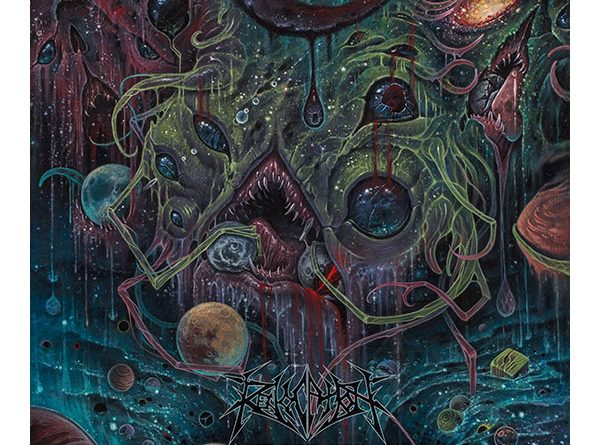 REVOCATION launches video for first single from new album, ‘The Outer Ones’

On September 28th, REVOCATION will release their new album, ‘The Outer Ones‘, via Metal Blade Records. For a preview of ‘The Outer Ones‘, a video for the first single, ‘Of Unworldly Origin’ (directed by David Brodsky / www.davidsbrodsky.com), can be viewed below:

Pre-order – metalblade.com/revocation – in the following formats:

‘The Outer Ones‘ sees REVOCATION pushing both the death metal and progressive elements of their signature sound harder than ever. “I knew that I wanted to go in a darker direction, and this is our most death metal album to date,” states vocalist/guitarist Dave Davidson. “Sometimes when death metal bands go down the prog route they lose some of that edge, but we wanted to keep the aggression at the forefront of what we do while still pushing our boundaries.” Moving away from the societal and historical themes that informed 2016’s ‘Great is Our Sin‘, this time Davidson has immersed himself in the fantastic, evoking one of the great writers of the sci-fi/horror genre. “The title is my ode to H.P. Lovecraft and the entities of pure cosmic horror that rule that universe he created. Since the new music we were writing was so evil and spacey in sections it seemed to be the right title to fit the overall vibe. But while the lyrical content is largely influenced by such writings, in every allegory there is of course some reflection of the real world, so I enjoy writing in a way that could have one overlaying meaning and then another deeper, symbolic meaning as well.”

‘The Outer Ones‘ track-listing
1. Of Unworldly Origin
2. That Which Consumes All Things
3. Blood Atonement
4. Fathomless Catacombs
5. The Outer Ones
6. Vanitas
7. Ex Nihilo
8. Luciferous
9. A Starless Darkness

Brisbane’s Sum of Us‘ debut EP release, “Sharp Turns in Dark Tunnels” will see the light of day this Friday July 13. The release from the Brisbane supergroup showcases the band’s prowess and out and out talent – and today they are dropping track “Eleven Tigers” as a final taste before the whole thing is released this Friday. The “Sharp Turns in Dark Tunnels” EP is available for pre-order now. The band worked with Head Atlas – a teaming of Chrispy Town (Osaka Punch) and Joel Myles on the production of this EP.The band has so far released tracks First Yawn and Forrest and released a short documentary about the creation of the EP. The documentary gave a massive amount of insight into the band and their “super group”-like formation, as well as the mindset of the individuals and the credo of the band in general. The Sum of Us mini-documentary can be seen here. Sum of Us is made up of five band members plucked from the Brisbane music scene and featuring members of Osaka Punch, Kodiak Empire and Red In Tooth, Sum of Us is a project that just clicked and made sense from the day they all met and jammed. Their first show was supporting In Hearts Wake, Young Lions and Stepson, and they followed that up with an invite-only absolutely packed to the rafters show in Crowbar’s Church space.Sum of Us are Jamie Swanson on Guitar, Jeremy Field on Guitar, Jasper Webb on Bass (Red In Tooth), Bryce Carleton on Vocals (Kodiak Empire) and Dane Pulvirenti on Drums (Osaka Punch). For more information, go to Facebook.com/SUM0FUS. For media enquiries, please contact Tim Price at Collision Course – tim@collisioncourse.com.au.

Australian prog metal band CIRCLES are now streaming the second track taken from their upcoming album, ‘The Last One’. The brand new record will be released on August 31st, 2018. The track “Tether” is now streaming below:

Guitarist/vocalist Ben Rechter on the new single: “Tether is the first song that I brought into CIRCLES, not knowing if it was what they’d be after, because it’s not quite the vibe that CIRCLES has been known for. But they all embraced it, and helped me get it to where it needed to be. The song is essentially about confronting the parts of your own psyche that are holding you back. There’s always people that can help you not only to survive, but to succeed in ways you wouldn’t have thought possible, but you need to be willing to take that terrifying but necessary step. It’s as much a song written to myself as a reminder as from me to anyone else feeling trapped. We started playing it live on our last tour, it feels really good in the set and is a nice change of pace in amongst the mayhem!”