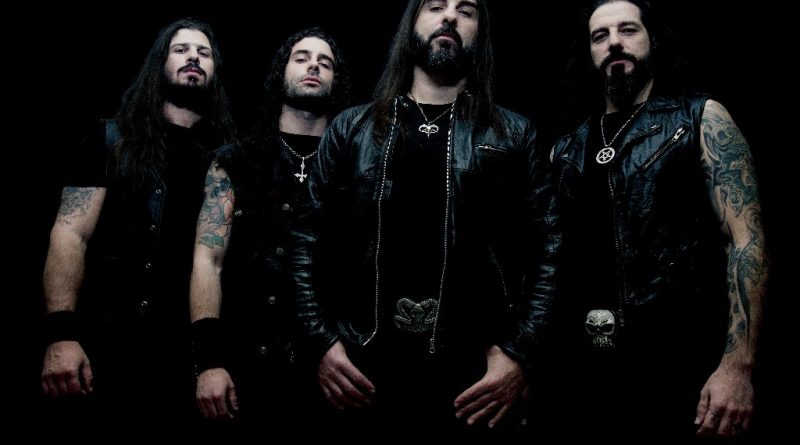 In celebration of the re-release of the album ‘AEALO’, Greek metallers ROTTING CHRIST have unveiled a brand new lyric video for the track “Pir Threontai”. Watch the video below.

On further news, the band has announced new European tour dates in support of the mighty WATAIN this November. The band will kick off “The Trident’s Curse” tour at the Byhaven Pumpehusetn, Copenhagen (DK) on November 2, 2018 and sees the band rampaging through 10 more countries until a final curtain at the Doornroosje, Nijmegen (NL). At all shows, PROFANATICA will open the ceremony. See below for an updated list of all confirmed shows.
ROTTING CHRIST festivals
17 Aug 18 Borre (NO) Midgardsblot Festival

Vocalist and guitarist Wayne Boucher explains how the band filmed the video in their rehearsal room using a phone: “We decided that the overall vibe of the song required a gritty, almost DIY approach and we wanted the focus to be on the lyrics and the musicianship. The video was edited by myself and our new guitarist, Kyle Engelsman.”

The inspiration behind the song comes from the corruption within the South African government and the current state of affairs. “I wrote the lyrics while away on business in Port Elizabeth”, reveals Wayne. “As it turns out, all the top dogs of our current government, the ANC were staying in the same hotel as I was at the time. Our president back then, Jacob Zuma was staying in the room above mine and so I felt inspired to write Walls Down about the high level of corruption in our government. It saddens me to think that even after the 1994 revolution in South Africa our people are still faced with inequality and poverty due to a self-serving government. “

Deity’s Muse recently announced a UK tour in August 2018. Hailing from Johannesburg in South Africa, the four piece have been honing their craft for 17 years now, proving to be an absolute juggernaut live. Having shared the stage in their home country opening for revered international acts such as Dead Letter Circus, Rise Against, Bring Me The Horizon, Blind Guardian, Unearth, Protest The Hero, Knorkator, Affiance, Monuments, 36 Crazyfists, Karnivool, TesseracT and Blindside, the band were invited to play the prestigious Euroblast Festival last year. Continuing on their mission for world domination, the band are now counting down to their long journey to Bloodstock…

“First off, traveling and seeing the UK is an experience on it’s own. This will be the first time we get to see so much of the UK. I’m particularly excited to see all the different venues that England has to offer”, explains bassist Alvin. “Secondly, I’ve been watching Sumer live at Bloodstock Open Air 2015 on YouTube. The atmosphere they create with their music is hypnotic, specifically their track “Chisel” (such a great song). Not only do I look forward to sharing the stage with such a prodigious band but I’m equally excited to create wonderful memories with them.”

Rounding off their UK tour with a performance on the Sophie Lancaster Stage on what is now being dubbed ‘Priest Day’ at Bloodstock Festival, the band’s UK jaunt racks up as follows:

Wayne adds: “Being included in this year’s epic Bloodstock Open Air lineup is an honour which feels almost unattainable for a little-known band from the tip of Africa. We’re frothing at the opportunity of sharing the stage with such an epic bill. I mean the festival is headlined by Judas Priest, Gojira and Nightwish! I’m still shaking my head in disbelief.”

German Riffonauts BLACK SPACE RIDERS have released the official video for “Leaves of Life (Falling Down),” a track from forthcoming album Amoretum Vol. 2. Revel in it below:

Although the dust has barely settled from the January 2018 release of Amoretum Vol. 1, BLACK SPACE RIDERS are set to return with its follow-up, Amoretum Vol. 2. Hard, fast heavy rockers morph into new wave indie sounds and even postpunk loses its “post.” Psychedelic triphop meets dub reggae roots and then ends in a loud rush of psychedelic riffs. This wild 14-track ride is scheduled to be released on July 27.
Pre-order Amoretum Vol. 2 on double vinyl (w/ CD), digisleeve CD and digital formats:
www.blackspaceriders.com/shop
blackspaceriders.bandcamp.com/album/amoretum-vol-2