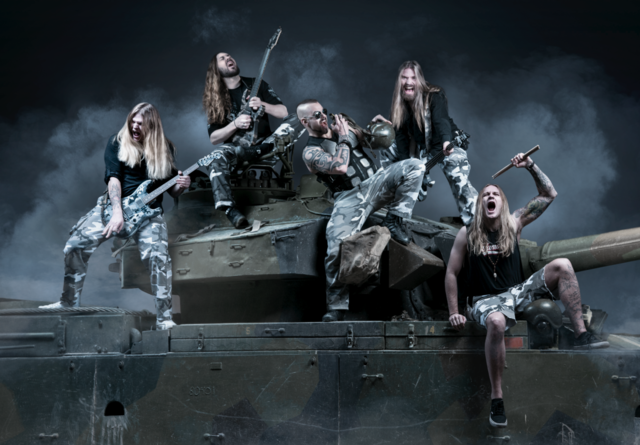 Swedish heavy metal heroes SABATON concluded their triumphant North American co-headlining run with German thrash titans and label mates KREATOR a few days ago but before they fly over to Australia to continue their world tour, the band have revealed a brand new music video as part of their collaboration with Czech Warhorse Studios. SABATON‘s cover version of MANOWAR‘s track ‘Kingdom Come’, combined with scenes from the brand new game »Kingdom Come: Deliverance«, can be viewed here:

Additional info about the game can be found, here:
www.facebook.com/WarhorseStudios
www.warhorsestudios.cz

EARTHLESS, who are in the midst of a North American tour in support of their new album »Black Heaven«, out today via Nuclear Blast, debut their video for ‘Volt Rush’. Watch the clip below:

The video, which is set in EARTHLESS’ hometown of San Diego, as well as neighboring Oceanside, was directed by skateboard/visual artist BB Bastidas and features the famed SoCal skateboarder Taylor Smith, aka T-Spliff.

“Stoked to present to you the very first EARTHLESS video, directed by artist BB Bastidas,” said drummer Mario Rubalcaba. “We were stoked to work with BB on this as he knows our background as a band and our close roots with skateboarding. His art is amazing and he also has a keen natural eye for film. Having Taylor Smith, aka T-Spliff, in it just makes it even sweeter. He is somewhat of a mythical figure of a skater, an amazing talent but chooses to shred at his own discretion. Those who know, know. This was a blast to be a part of and we hope you enjoy this short high energy rocker that cruises around our hometown of San Diego and local club, The Casbah.”

»Black Heaven« is the band’s first release to feature a majority of songs with vocals and is also the trio’s first time working with producer Dave Catching (EAGLES OF DEATH METAL). Rubalcaba explains the impact the Joshua Tree studio had on the outfit’s new music: “This album represents yet another branch on the ever growing and now adolescent EARTHLESS tree. I spent a good amount of time just gazing into the stars at night while we were out recording in the desert of Joshua Tree. I think this somehow lent itself into the title and feel of the album on some songs. This LP has a touch more of our classic rock roots showing, just stuff we grew up on, and it’s great to finally utilize Isaiah’s lyrical talent and soulful voice. As cliché as it sounds – »Black Heaven« should be played LOUD!”

Get the format of your choice via this link: http://nblast.de/EarthlessBlackHeaven

New band formed by well-known musicians of the local alternative/hardcore scene : Gil (Jesusproject, Thot), Jean-Pierre (El Comer Ocho, Volver…), Tino (Channel Zero) and Vincent (Lethvm, Old Wvrms), Lamiräl will release its debut EP called ‘This EP has no name and it’s alright’ for Digital exclusive on March 2nd and a little bit later for LP edition through I FOR US Records / GRIZZLY INC.